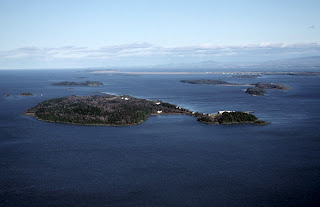 or from "La Belle Province" as les Quebecois call it. Not seeing much of the belle as floods have taken over fields and roads. Quite the sight to see cars driving on raised sideroads surrounded by trees and hydro poles several feet deep in water. My camera ran out of juice, much to my dismay, but tomorrow I hope to record some New Brunswick sights.
I went down to Grosse Ile, however (picture above) and stood at the shore looking out at the island. There wasn't another human in sight, much less a ferry to take me out to the island in the middle of the St. Lawrence so I could walk around the hallowed (and now declared a Heritage Site in 1984) land of the Irish who arrived and died there in the dreadful Famine Years of the 1840's.
Surely one of these years a magical boat will emerge out of the mist to ferry me over. I walked through an entire hotel nearby, every door was open to the wind and the river, but ne'er a body to be found. Much trust though, I could have taken the keys to their van, their entire bar stock and some lovely desserts in a glass case.

On a sadder note, I learned that my last surviving aunt on my father's side died this morning. She was just shy of her 99th birthday. The loss has hit me more deeply than I ever would have suspected. I tend to freeze and process for quite some length of time when I hear bad news. It simply takes a while to percolate through. It hit me later in the afternoon and now I have a blinding headache from my grief.
Auntie Francie was a woman who was refused admission as a postulant to the local convent when she was a teenager because an older sister had the audacity to marry the protestant minister of the town and had been denounced by the parish priest from the pulpit for doing so.
Rather than making her bitter, it propelled her into a life, not of her choosing, but of necessity - a life of service to a Great House in the town in which she lived.
The Lord and Lady were very kind to her and I never heard her speak a bad word about them. She cooked and occasionally filled in as a sort of nanny in waiting to the regular nanny. She was full of stories of the lives of these people when she visited. A real-life "Upstairs, Downstairs" if you will, told with charm and enthusiasm. She never ran out of stories and I am glad that my daughter and granddaughter had the fortune to visit with her on a few occasions.
She retired at fifty five and the convent that had rejected her now asked her to take care of their accounting books and banking which she did until she was ninety. Tragically, while she was at Mass one morning a couple of punks/louts broke into her small cottage and damaged it and took her pension money. This scared her so badly she refused to live there anymore so wound up in a rather awful old folks' home in the town where there were no private rooms, just large wards with everything shared. That is where I had seen her last and she was, heart-breakingly, most unhappy but she always cheered up when rellies arrived.
I had looked forward to seeing her again this September, now sadly, not to be.
Sleep with the angels, beloved aunt.
Posted by Wisewebwoman at 11:28 PM