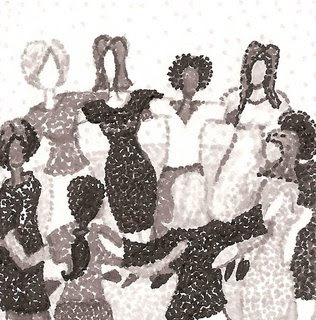 "Little Christmas" - or "Women's Christmas" as my mother used to call it - always fell on January 6 and was a tradition unto itself. Maybe it was just a peculiarity of the time and place in which I grew up - Cork, Ireland in the fifties and sixties in the last century. (And I don't think I ever thought I would write "last century" with such cheerful abandon!)


I was remembering Women's Christmas and wondering whatever happened to it and if anyone in Ireland is carrying on its charm and wonder anymore, or are we all swept up permanently in the Big Day, December 25 itself. I've talked to some Ukrainian friends here and they celebrate their traditional Christmas on that day - Twelfth Night as it is known in England - but I believe that Women's Christmas was unique to a time and place in Ireland now gone forever. But I hope not.


The day of the Women's Christmas women were supposed to take it completely easy after all the hustle, bustle and hard work of the prior months, with the men now taking care of them and cooking and cleaning all day. I can assure you that this never happened in my house as, like many men of his era, my father didn't know one end of a broom from the other and boiling a kettle was the peak of his culinary skill.


However, my mother was the eldest female of her family so consequently her sisters, sisters-in-law, aunts and mother came around on that day and a smaller, daintier version of the Christmas meal was served. On the menu were: a bird (usually a fine roast chicken), a smaller lighter plum pudding and a lovely cake, usually dressed up in the fanciest of pink wrappers with silver sprinkles everywhere on the pink and white icing. The most delicate of my mother's tea sets was brought out, my own favourite, the lavender and pale green set. I would love to hold one of these little saucers up to the light and put my hand behind it, as it was so fragile you would see all your fingers through it.


Gifts were exchanged, usually the most feminine of presents, perfume or talc, bottles of Harvey's Bristol Cream were lined up on the sideboard and the fun would begin. I was encouraged by the grandmothers and great-aunts to always give my mother a little gift on that day for the woman that she was and I did, from a very early age. I would buy something small in Woolworth's on Patrick Street, a little comb or my personal favourite, those fiercely aromatic bath cubes, which were a whole three pence each. I would wrap it up in layers and layers of newspaper and it was always exclaimed over with the phrase, "Well now, I can hardly wait to use this"!


The coal fire would be stacked up high and already lit in the front room before anyone arrived, with Bord na Mona briquettes piled on the fender around it, and any male showing his face would be banished to some other spot in the house.


I remember the women gabbing all day and in the heel of the evening getting into the stories and songs of which I never, ever tired. My female cousins and I would sense the privilege of being included in all of this, there was a respect in us and never did we exemplify more the ideal of children being seen and not heard than on that day. Unasked, we poured the drinks and ran outside to boil another kettle to make a fresh pot or brought in the sandwiches and the fairy cakes and the chocolates and exotic biscuits in the later part of the day.


I remember the hoots of laughter as my aunts dipped their ladyfinger biscuits into their sherries, letting us have a small sample of the incredible taste. This was the one day in the year that I could get a sense of how the older women in my family were when they were young girls themselves. Full of fun and music and stories. I learned about their old boyfriends and who courted them, how one of my uncles had dated all four sisters before settling on my aunt. How wild he was and how she tamed him.


I'd learn of the sad miscarriages and the stillbirths, the neighbours who went peculiar from the change or the drink, the priests who got spoiled in Africa and became pagan; or who had the failing, the old great grandaunt who took on fierce odd after her son married. I didn't know what a lot of it meant then but I stored it all away to ponder on in later years.


They would dredge up old musical numbers from their single days and sing a few bars while one or two got up and showed off their dancing legs. Sweet Afton cigarettes were lit and my grandmother would puff on her dudeen and we all could hardly see each other for the clouds of smoke.


Stories were told and they would get caught up on all the doings they might have missed in their conversations all year, obscure marriages and births, sometimes in Australia or other far flung and exotic outposts of the Irish Diaspora. But most of all I remember the peals of laughter which resounded throughout the house all day and evening.


A moment would come in the midst of all the hilarity when the time for a spot of prayer came. Out of the big black handbags that never left their sides would come the rosaries. These would be threaded through their fingers and all the heads would bow in unison. I never knew the prayer and haven't heard it since but it was to St Brigid, the women's saint of Ireland, and it involved her taking all the troubles of the year before and parking them somewhere in heaven and thus they were never to be seen again. This was followed by a minute of silence (while St Brigid did what she was asked, I have no doubt), then a fervent "Thanks be to God and all His saints" and a reverent kiss on the cross of the various rosaries which were all tucked away carefully into the handbags again. Then the glasses of sherry or the cups of tea were refilled and the whooping and carrying on would begin afresh, the bothers and griefs of the past year now permanently banished and forever.


And I wish this for all of you out there - both at home and abroad.
Posted by Wisewebwoman at 3:40 PM