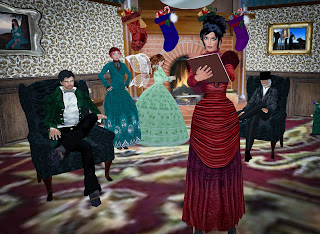 You get to an age when the somedays are all behind you. Do it now or not at all is my new mantra.

My recent (well the last few years') desire is to be a Seanchaí. One of those old Irish story tellers at events. You know, engaging with the audience, taking on a role or two within the context of the old story. Using no notes. Au naturel, unlike my previous foray into a one woman performance thingie.

My first gig as a Seanchaí is in a month's time at a dinner theatre. I will be telling a story from my life, well my aunt's life, previously featured in Time Goes By a while back. The venue is an old convent converted to an inn so I thought it would be conducive to a story about my aunt's nunnish aspirations.

I've been commissioned to write another play, another musical drama, and that is completely over the top exciting. Auditions will take place soon and the first table reading will be at the end of May. I am hoping for it to be an inter-generational theme, depending on cast.

I was at a concert complete with afternoon tea on Saturday. It was a wonderful event, great music and the tea was deluxe, lashings of beautiful food, flowers and china. A few of my friends are in the choral group. They perform mainly jazz interspersed with folk songs from the sixties and seventies, along with Andrews Sisters' numbers. One came up to me during the intermission and put her head on my shoulder, nearly in tears.

"Oh, WWW," she said sadly,"Can you believe it? My life is nearly over! I'm getting so old. I'll be fifty next week!"

Somedays, I wanted to say as I comforted her. You still have somedays!

But she wouldn't have understood.

Posted by Wisewebwoman at 6:51 PM