Black and White and Denial All Over - Part 2. 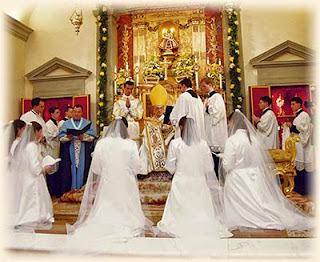 Women at their wedding to the greatest polygamist of all time.

And there are some that come out and talk about the mothers of these "wayward" 14 year old pregnant girls. Why didn't the mother protect them from the incesting father/brother/uncle. You must be joking, would be my response.

The grip of the RC church was so huge that no Irish mother, in the fear of being consigned to hell, for all eternity:

(1) Took birth control
(2) Refused her husband
(3) Worked outside the home, as if she could anyway with endless children to care for.
(4) Even considered divorce - it was illegal.
(5) Separation was the women's fault. She made her bed, why couldn't she lie in it, the slut?
(6) If she did separate from him, her life, poor before, was now abysmal beyond belief with no financial support from state or church and the complete shunning of her neighbours and family. I will write more of the power of shunning later. And she'd heard of women who had to resort to prostitution to make ends meet.

So leaving her husband was out of the question and reprimanding him for molesting her daughters, would result in violence towards herself and the child who told her. Police turned a blind eye, as did the church who would advise her neighbours and family to shun her. Husbands controlled the purse strings and what was donated to the church every Sunday was his and the church's business. He was the cash cow and deserved protection. At all costs.

The RC church was and is a huge business. In Ireland, it controlled the schools and the hospitals, orphanages, reformatories (yeah, right) and homes for the worst sinners of all time: "unwed" mothers, often as young as 12.

Have you read about the conditions in these homes of the "unwed"? As punishment for their sins, they had to give birth:

(1) without medication or pain relief.
(2) when ripped in the process of birthing, as so many of them were, they were forbidden stitching so the subsequent infections added to their pain and often resulted in sterility and lifelong incontinence.
(3) they were forced to wet nurse the babies of mothers who died birthing.
(4) their babies were sold as further punishment to Americans for the highest price donation.
(5) they had to pay to be released from the hell-holes of these institutions or endured years of slavery. Their families viewed them as "damaged goods" so they were unmarriagable and a life long financial burden so were left to rot in these places.

I could go on.

Follow the money has been my mantra for a very long time. The RC church made untold billions from the "simple" Irish people. It paid to keep them breeding like rabbits in and out of wedlock, it all paid off handsomely no matter which way you sliced the product. A per capita amount was paid by the Irish government to the penal institutions for feeding and clothing the "illegitimate" products of rape.

And those "evil bitches" those sisters, married to the Great Son of the Invisible Cosmic Housekeeper? Yes, married. They would wear a veil and don a wedding ring 'n everything for the polygamous wedding ceremony. And, I nearly forgot, had all their hair shaved off, it was a symptom of vanity, they couldn't have anything around that reminded them of their femininity, their very womanhood.

And their husband (Great Son of ICH) spoke to them only through their priest or if they really got rebellious, ICH's henchman, the bishop.

And how were they instructed?

Posted by Wisewebwoman at 9:56 AM