Black and White and Denial all Over - Part 4 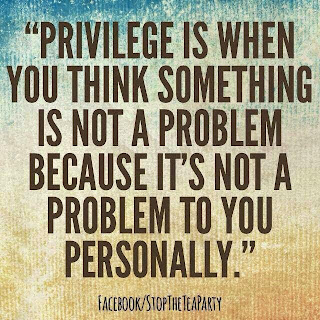 One of my greatest disappointments in life and in the human race is that so few men stand up for women. I've heard from two or three on this blog, private emails, mainly fathers of daughters or granddaughters, but you know what? I never hear from fathers of sons. And that says so much. Women need more men speaking out. Saying "I would never behave that way!" and moving on is just not enough. I have many "good" men in my life but they are silent. Where is the massive male outcry against these misogynistic paedophiles and sadists masquerading as the One True Church?

Maybe it's the old case of Irish people bowing to the masters and never standing up for what is right. The RC church has such an empowering grip on the male psyche enforcing the privilege of being male in this male-driven church. I ask myself: Why on earth would they want to change? Why on earth would they want to fight within this male bastion of droit du seigneur and subsequently be called "pussy-whipped" or worse by their male cohorts?

Another unfortunate case of "I'm alright, Jack - fight for your own justice and equality, woman. But don't ask me to give up anything."


The Brehon Laws,long before the arrival of the mythical Saint Patrick to Ireland declared women as fully equal and could inherit and lead. Needless to mention, this was all abolished under the mighty males of Rome. Power and endless propagation being the driver. Forget those stupid Brehon Laws where men and women were equal and Ireland had the most advanced justice system for its time. Where there were no prisons, no crime. And restorative justice prevailed. Yes, there were flaws, but early Christianity brainwashing must have felt severely threatened by such female freedoms. Men's rights to regulate our bodies and what we do with them still prevails.

And yeah, I caught that article in the Irish Times about Ireland being closer to Muslim teachings that anywhere else in the world.

I only have to think of the shame of Savita to realize that nothing has changed in the country of my birth.

Posted by Wisewebwoman at 10:34 AM