Black and White and Denial All Over - Part 3 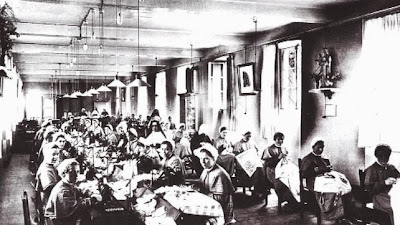 And why was my country of birth ripe for such abuses? The GreatPotato FamineHolocaust in Ireland in the 1840s where up to 4 million people were deliberately starved or forced to emigrate - often on so-called coffin ships which drowned them anyway - changing the very landscape of Ireland utterly and forever in many, many ways.

All of the Irish born people I know and have known, including my own large indirect and direct relatives can't tell you how their families survived this "famine". There is a huge sense of shame some historians have it, and also PTSD. The survivors of this "famine" were ripe for further traumatization by the RC church and strict moral guidelines were laid down. Much of this was based on Jansenism a rigid form of Catholicism with firm rules on sexual behaviour. I remember one of my more open-minded teachers interpreting (scoffingly) the procedure for marital sexual intercourse: no removal of clothing, thou shalt not see the naked body of thy spouse and encouraging the denigration of the products of unsacramented coitus as the "spawn of the devil" to be shunned and despised.

There were 250,000 women and children over a 40 year period processed through the Magdalene Laundries, Industrial Schools, Mother & Baby Homes and “orphanages” and "reformatories" - a total of 72 RC church run institutions across the country.

And as of now, all of this shameful history is not taught in the schools. These girls/women/children/babies are deleted and forgotten. Revisionism at its most extreme. Why? Because the RC church still controls the curricula in schools. And embraces the notion that the Irish should remain ignorant of the horrific crimes committed by those who offer them salvation in the hereafter. The twisted mindsets around these shameful betrayals remain and are continually encouraged. Many of my friends and relatives still participate and donate to this abusive cult. Much like victims of the Stockholm syndrome.

Compare this to the school curricula in Germany where students there learn about Hitler and the shame and degradation of the extermination camps and the propaganda of Hitler. So that it doesn't happen again.

In Ireland the swelling of Catholic coffers continues and very little restitution has been paid to the many, many victims of its crimes against humanity - and absolutely no one is addressing the multi-generational effect of the original crimes: the secret sales of children with no official records maintained, the life-long slavery and near starvation of "unwed" mothers and the traumatization of babies and mothers torn apart, along with the deceitful and self-justifying lies told to both the sold babies and the devastated mothers. It was all about the selling price of the children and the capitation grants given to these institutions by the government, subsequently funnelled to the Vatican, one of the wealthiest entities in the world.