The Unfortunate Sanitization of Language 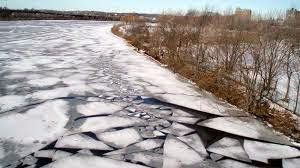 The Exploits River in Badger, Newfoundland.

I've noticed this in so many reports in newspapers and on the web. As if the English language goes through some sort of grinding modifier to render it innocuous and then spews it out the other side in politico-spin or media spin or whatever you'd like to call it.

The blandness of the language has me rolling my eyes and then closing them and regurgitating word for word what I anticipate are the next few tired old profundities uttered by whomever. I am always correct in my assumptions.

Thus it was with delight I read a report in today's newspaper on the town of Badger, Newfoundland. Don't get me wrong. Not a delight in the misfortune of the flooding expected with the rising waters, but in the language used by the Mayor of Badger.

He is explaining the elevation of the water level of the Exploits River which seriously threatens the small town. Badger doesn't need or want spin doctors to smooth out the language. Listen to the rhythm of his words as he paints the Exploits River with personality:

"She just took all that friggin' ice that was even up above us and she took that ice and she pushed that down around the corner."

"She built up that much pressure and plus the temperature got up a little bit in the middle of the afternoon and she made a big pullout."

She be some powerful woman, that Exploits River.

My thoughts are with the town and its her safety in the challenges it she faces.
Posted by Wisewebwoman at 2:00 AM