And the mountains going to shout amen! 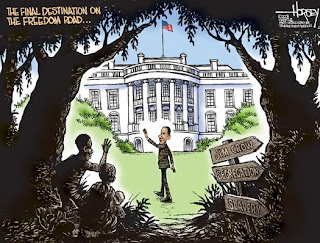 An American, living in Newfoundland, calling in to CBC yesterday, weeping:

Yunno? Mr. Bush was so damn mean.
Mr. Obama is so damn kind!

Yeah, Mr. America, I and the world applaud you and your voting brothers and sisters!

Thanks to you, our tiny little planet now has hope.

Its coming through a crack in the wall
On a visionary flood of alcohol
]from the staggering account
Of the sermon on the mount
Which I dont pretend to understand at all
Its coming from the silence
On the dock of the bay
]from the brave, the bold, the battered
Heart of chevrolet
Democracy is coming to the u.s.a.

Its coming from the sorrow on the street
The holy places where the races meet
]from the homicidal bitchin
That goes down in every kitchen
To determine who will serve and who will eat
]from the wells of disappointment
Where the women kneel to pray
For the grace of God in the desert here
And the desert far away
Democracy is coming to the u.s.a.

Its coming from the women and the men
O baby, well be making love again
Well be going down so deep
That the rivers going to weep
And the mountains going to shout amen!
Its coming like the tidal flood
Beneath the lunar sway
Imperial, mysterious
In amorous array
Democracy is coming to the u.s.a.

Im sentimental, if you know what I mean
I love the country but I cant stand the scene
And Im neither left or right
Im just staying home tonight
Getting lost in that hopeless little screen
But Im stubborn as those garbage bags
That time cannot decay
Im junk but Im still holding up
This little wild bouquet
Democracy is coming to the u.s.a

PS (posted later) And my good friend Nick, in his comments, points to this well written and funny column in The Times by Martin Samuel. All about black guys having to clean up the white guys' messes. LOL.
Posted by Wisewebwoman at 10:29 AM