Do you bang your head off desks, steering wheels, walls, like I do when you hear all the carryon about these corporate bailouts, should we, shouldn’t we. As if there is any other answer apart from no, no and no?

Are we all now smarter than the turnips that govern us?

Like we know, unlike the government, that the North American auto industry in U.S. & Canada is dead on its feet, has been for years: Hello Japanese Toyota Hybrid, Welcome German Smart Car!

They were all fast asleep at the switch churning out Hummers, SUVs, Wagons, Caravans, et al for the so–called soccer moms (I don’t personally know any, no one I know knows any) and their grunting big-country ranger-spouses. So what’s with all the wittering on about throwing something like 25 billion dollars at The Big Auto Three?

They are lining up as I write, cap in hand, waiting for a bailout. For what? For being so stupidly thicker than the afore-mentioned turnips for the last twenty years? For not even investing a dime in alternative energy or a cleaner planet? For killing the electric car? For heart-stopping dividends and bonuses to executives?

Now this is on top of all the other bailouts, summarized for us nicely below: 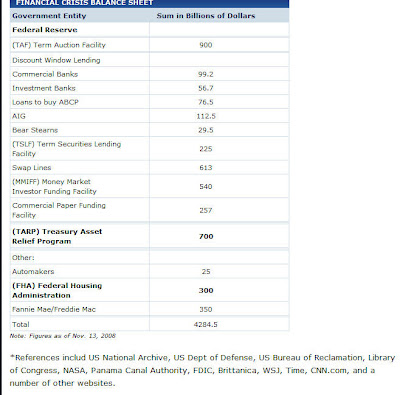 That’s totalling $4.28 trillion dollars, for starters. OK, here it is written out so we can catch all those zeros:

that's more than what was spent on WW II, if adjusted for inflation.

Like I said before, this will go down as the greatest robbery of wealth from the public sector by a very privileged few in the history of the planet.

Mission Accomplished for the Shrub and his cronies.

On second thought, maybe we are not smarter than the turnips after all.
Posted by Wisewebwoman at 10:34 PM