Gazing in the Crystal Ball 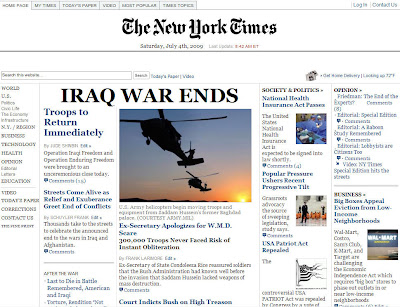 Is it too much to hope for? Really? I read this New York Times newspaper (note the date of July 2009) today. And even though it is a terrific spoof I had a dream. I was wistful, I was wishful.

War (well, not war but unwarranted and illegal invasion to me and many others) Ends.Tick

A wonderful read. Enjoy it.

This brilliant parody is the work of The Yes Men a group who practise "identity correction" and have represented themselves as being spokespeople for the government, Dow Corporation, WTO, Exxon and many others. They bring attention to the criminal activities these perpetuate by attending their events legitimately and then satirically attacking them (a la Colbert attacking Bush at the Press Corps Dinner).

Many thousands of copies of this newspaper were delivered to New Yorkers yesterday.

Satire. Ain't it grand? Ain't it oh, so truthful?

Posted by Wisewebwoman at 12:02 AM