Another Wee Treasure Has Landed! 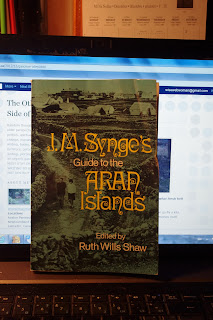 I read. A lot. No teevee by choice can open up one's life.  I hunt for books sometimes. One such was #10 on a list of loves written about here. Today another love dropped into my spanking new mailbox that I can access 24/7 now that the post office has been shut down. It's a little beaten and bruised but a new treasure none the less.

John Millington Synge has been a hero of mine for a long time. One of the most fascinating aspects of his writing has been his detection of the inherent paganism beneath most rural Irish beliefs, particularly in the Aran Islands where he stayed in the summer months of 1898 through 1901. He had been living in Paris and ran into WB Yeats who urged him to further his understanding of the Irish language  by visiting the Aran Islands.

He maintained  a journal on his stays on the islands which was published. Of which I now have a copy, after much hunting.

JM Synge was the playwright of "The Playboy of the Western World" amongst other great works and died far too young of cancer.

This journal has many photos and maps and quotes from the locals and the structure of their daily lives and the cost of lodging and of food. I am finding it utterly riveting.

Listen to this (what he says about Inishmore):


The sense of solitude was immense. I seemed to exist merely in my perception of the waves and of the crying of the birds, and of the smell of the seaweed.

And this: (from a resident of Inishmore):

"Do you see that straight wall of cliff? It is there the fairies do be playing ball in the night, and you can see the marks of their heels when you come in the morning, and three stones they have to mark the line, and another big stone they hop the ball on."

And I leave you with a quote from Padraic Colum, the poet, quoted by JMS in his journal:


"And I knew what you heard and what you saw,

That left you for a little while withdrawn -

The lonely land, the lonely-crying birds!"

Posted by Wisewebwoman at 10:25 PM