My very own world 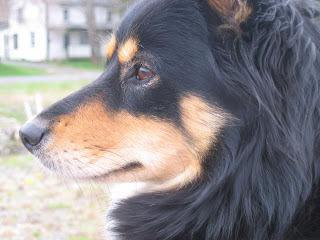 Around the man made lake, Lake Aquitane,
The dog and me. Me and the dog.
Her head down, snarfling a thousand smells.
My head up drinking the night sky of a thousand stars.
Both of us sprinkled in snow dust.

We scamper around the lake.
The dog and me. Me and the dog.
Houses huddled in the distance. People huddled inside.
Captured in the blue light.
Captivated. Entranced by
Anna Nicole Smith and Britney bare-head.

We meet not another soul out there.
The dog and me. Me and the dog.
And that is perfection itself.
In my very own world.
Posted by Wisewebwoman at 1:28 AM No comments: 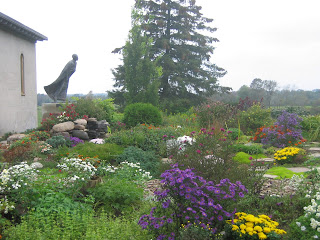 She spent a lot of time with Saint Ignatius out in the garden, digging and planting it for a few years now. She'd go on about the kids and her ex-husband who married The Wan. She'd thought Ignatius had special powers, that he could intercede for her.

She'd bought that expensive Italian stuff once Fr. Ryan had told her the big news. The silver bottle was for the eyes, it took away the wrinkles. The gold bottle was for around the mouth. Made especially for smokers, she thought it said. There was no English translation. She'd heard it removed accordion lips. All she could do was hope. And of course pray to Saint Ignatius.

She told Ignatius to intercede again on her behalf to get rid of the wrinkles. The smoking kept her weight down. She would listen to the hunger grumbling away in her stomach, puffing on her cigarette as she leaned back on the stone bench to take a rest, looking up at Ignatius, flying in the sky he always was. Ignatius flying over the garden, over all her hard work. Over all the wild colours of it. As if he were admiring it too.

Fr. Ryan had said it was spectacular what she'd done with it all. She nursed the word for a few months. A month ago Fr. Ryan had said she'd the hands of an artist, an artist of God, as he came out through the French doors and held one of the trellised roses between his fingers before bending down and smelling it and smiling at her in that special way.

Afterwards she'd looked up at Ignatius and winked at him and said it was great to be appreciated. It was something her ex-husband had never done. Her time had come, maybe.

A week ago Fr. Ryan had said he'd something to tell her, it might be a shock. He took her elbow and sat beside her on the bench, Ignatius swooping in the air above them, drinking it all in.

I'm leaving the priesthood, Maggie, he said, I can't fulfil my vows anymore.

She found herself blushing, waiting, anticipating. She cleared her throat expectantly, ready to announce her feelings too.

But when he stood up in the silence, she looked up at him. He was blocking Ignatius.

Why Father? hope slip-jigged inside her. Her voice was huskily attractive to her own ears which was unintentional. That would be the cigarettes. Her belly held a spreading warmth.

The sins of the flesh, Maggie my dear, I'll have to say goodbye now. Tou're a good woman, a very good woman.

And he'd immersed her hand in both of his, blessed her and then bowed and left through the French doors.

You'll be in touch? she'd asked the closing door. But he didn't hear her. Of course he would be. That would go without saying.

She weeded the lily of the valley circle which was nestled in all the yellow and purple of the claspea.

So Ignatius, she sat on her haunches and looked upward.

You'll take all that to Himself, right? You'll do the interceding for me up there? It's been a week and he hasn't called me yet. It must take a while to leave the priesthood and get your affairs in order. But I'll be ready for him. I'll be waiting.
Posted by Wisewebwoman at 1:55 AM No comments: 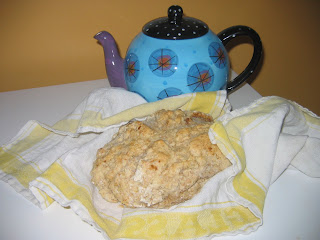 All I know is I did the best I could with what I had, I loved them dearly and too much it seems for the pain to be this great today.
Posted by Wisewebwoman at 2:28 AM No comments:

The stories in my day 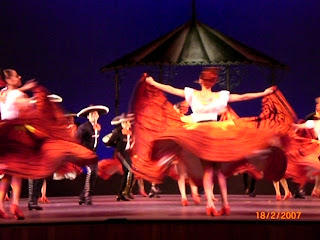 Like this.The long call from Dublin, my friend since we were five. Telling me of her daughter who left the husband and almost the baby too. Her other daughter swimming upwards from bi-polar to teach dance to the elderly.
And this
An email with a joke and a howonearthareyou from a friend in Hong Kong airport.
And this
A friend sharing the news of a wake for one of her friends, died of cancer, ten years younger than us. Gone just like that. Leaving smiles and an unborn grandchild.
And this
A friend grieving her husband's fresh drunkeness, her son's stillborn child. He blessed it and wrapped it and comforted his devastated wife.
And this
And over dinner with a friend, sharing our thoughts on the rage, The Secret, why the focus on money? It is so American. What happened to passion and purpose?
And this
And meeting a man from Sligo, an old old man on a stick who spoke of being expelled from every boarding school in Ireland and how, in disgust, his father wouldn't speak to him for months on end.
And this
And a caring email from a brother at the end of my day, telling me his story of a wonderful weekend in Mexico with love and laughter and a wild ballet of colours on a magnificent stage and I post a picture of it here.

Ordinary stories in an ordinary day. And how extraordinary it all is when I write it down.
Posted by Wisewebwoman at 2:18 AM No comments:

Thinking of the gannets at Cape St. Mary's 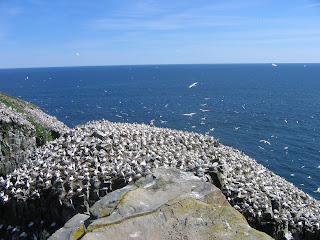 The snow of winter piled up against the back door. Brave sparrows defy the ingenious squirrels who could crack Fort Knox if there was birdseed inside.

And the gannets of the summer come to mind. The millions of seabirds at the Cape. Outnumbering in hundreds of thousands the avid birdwatchers, outkeening the whir of the cameras. We are in a cathedral of birdcalls. The stained glass of the cliffs and ocean the backdrop of eternity. The crash of the waves like the pipes of a celestial organ. We are cowed and awed. What place do we have on this precipice?

My soul yearns to go back there.

To stand in reverential humility.
Posted by Wisewebwoman at 2:52 AM No comments:

Struck by a phrase and holding it...

This happens more than I'm aware of. Some I just print off and place on my bulletin board - like this one from Ray Bradbury~

You must stay drunk on writing so reality cannot destroy you.

And from Orhan Pamuk~

The writer's secret is not inspiration - for it is never clear where that comes from - but stubbornness, endurance. The lovely Turkish expression 'to dig a well with a needle' seems to me to have been invented with writers in mind.

We sit at tables and desks with pen and with paper, with fancy notepads, with silver pencils and leatherbound journals purchased in Paris, with computers and typewriters, with fancy Maccy colouredy sleeked sci-fi-ish screens and wait for the muse, the magical one to touch us, to find the word, the letter, the phrase that will resonate underneath the story of the inner people we harbour and nurse through all the toils and troubles of our everyday lives with everyday jobs and everyday relationships.

How grand the passion, how passionate the grandness of our desires.

For that alone, this trudge along the earthly plane is worth every sling and arrow.
Posted by Wisewebwoman at 10:30 PM No comments: