Little Abeer and the American Marines 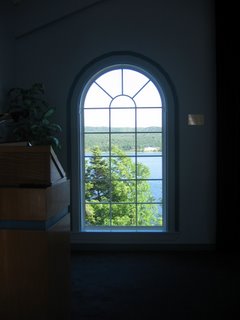 The opportunity was there immediately after 9/11. But instead, in the name of the tragically fallen in the Twin Towers, evil and horrific acts were committed against children such as Abeer. Countless children. The disregard for these lives and those of their parents and familities and the lives of these often mentally challenged, marginallized and impoverished soldiers is appalling. The circle keeps getting wider and wider, atrocity after atrocity. Absolutely no good will ever come of this. The evil empire of the U S of A was formed in the coup d'etat of 2000 (some say even before) and for the republic to be brought to a state of grace takes another in the form of a We the People declaration and a massive insurgency. It starts with self-respect. I don't see it in this current occupation.
------------------------------------------------------------------------------------
WORLD OF THE SMALL
--------------------

I was surprised by Loons this morning, calling across the bay to each other.
Grey and green day here. Sun hidden somewhere in the grey flannel of the skies.

A poem from yesterday with photos of windows from the church across the bay:

Come outside all ye faithful!

Come outside for the glory of God

Is not found within these walls.

Now shout Hallelujah to the sky!

Church at Mount Carmel, Newfoundland
August 17, 2006
Posted by Wisewebwoman at 11:44 AM No comments:

And it doesn't. Not with the evidence of Florida in 2000 and the Diebold Debacle of 2004 in Ohio and of course the millions of blacks who could change the outcome all in prison for minor offences and with no audit trails on any of the supposedly "free" elections, they were/are and will be stolen. The only way out, in my humble opinion is a revolution and civil disobedience. Democracy has fallen and it can't get up. This is frightening beyond measure. I, for one, am terror-stricken that the world has come to this.
>>end of snip.

I'm SO frightened for the world of my granddaughter and her generation.

small
-----
and I walk 5 kilmetres by the shore and listen to the waves lap and the sunset so brilliant and am reminded of the old Simon & Garfunkle song:
"The Sun is Burning in the Sky" about a wonderful sunset such as I was seeing, with dragon-flies swooping among the trees and crows cawking as they come to rest and the gulls and cormorants fighting over a scallop shell and the sandpiper teasing my dog as she does every night and I think, this could all leave in a flash. And there is no other "Rapture", THIS is the rapture.
So I stay in the moment and celebrate the now and leave the mulling to others, just for now.
Posted by Wisewebwoman at 10:47 PM No comments: