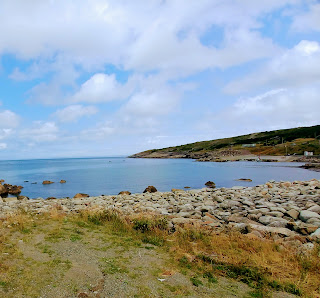 I was in my happy place (see above photo) in a welter of gratitude having been told an hour earlier that I didn't have cancer. Mind you this was after endless and often painful and exhausting tests.

There was a long string of boats bobbing in the water which reminded me I should be carrying my "real" camera in the car and not this inadequate Android camera phone. It doesn't do the scene justice.

I still haven't found the "normal" run of myself but maybe that's now lost in the mists of time past. I do dream about "normal" at night. Much of it involving massive effortless hikes in the brilliant scenery and seascapes around these parts. I hate waking up with the threads of such dreams still befogging me like gentle spider webs. 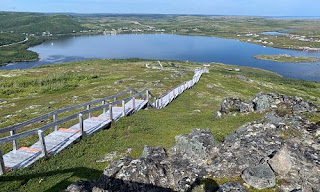 I picked up this little shelf sculpture in Red Bay, (see above) where the graveyards of all the whales massacred in the time of the whale-oil industry for lamps and bones for corsets is a moving scene on the shore.

This place is so isolated and under-visited that the birds have a great time on the "killing fields" above, feeding on the sea urchins and shedding feathers. I thought these were perfect examples of the beauty of sea urchins and treasure the memories they hold. I was grateful for my racing red wheelchair that Grandgirl pushed so expertly through the paths and sometimes helpful boardwalks. 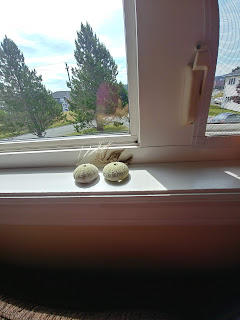 And isn't that what life is all about, finding the slivers of gratitude, often minuscule, but there amongst the ordinariness of it all if we look for them.
Posted by Wisewebwoman at 11:10 AM 33 comments: 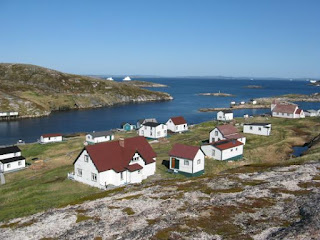 We stayed here for 3 nights. It's accessible only by a ferry of 1-1/2 hours (9 miles out) duration and there are no vehicles on the island at all. It's like going back in time two centuries ago. On route we saw whales and the crew entertained us with the incredible history of the entire area.

A welcoming fire was in the stove in our nearly 200 year old house when the four of us arrived. It was lovely that all our luggage was taken on board the boat and it awaited us when we got to our house. 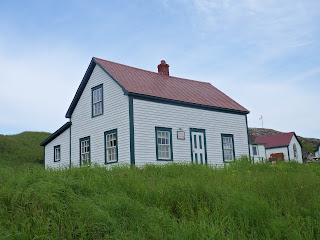 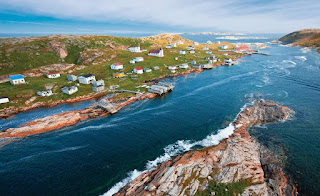 Writing What I Want to Write

The trip recedes but resides in my journal. I can't seem to get cohesion on that to transfer it to the blog page. I am letting it go for now as procrastination has got me not writing at all.

My lovely all in one computer with its lovely fat screen has been fixed by my genius tech guy. At a ridiculously low price as always. He loves the challenge he tells me (he's retired). It needed a few parts that he sourced and it's humming like a charm. And at the speed of sound it seems. A brand new solid state drive in her innards.

I met a friend I hadn't seen in nearly 1-1/2 years during the week. In our local café. And as soon as we saw each other we burst into tears and then sat and nattered for 3 hours.

Yesterday I went to an afternoon tea party at a friend's house but actually it turned into dinner with a bunch of friends and it felt like, you know, so normal. I had an absolutely lovely time climbing out of my own head and listening to the updates on all these much younger friends' lives. Kids ran in and out of the rooms, music played, the sun shone, half of the guests sat on the patio outside, and I held court at the dining room table in the cool air within, George (my cane) by my side. I mainly listened though.

Today my helper is in the apartment bringing order to the chaos of over a month without her. She is a treasure. 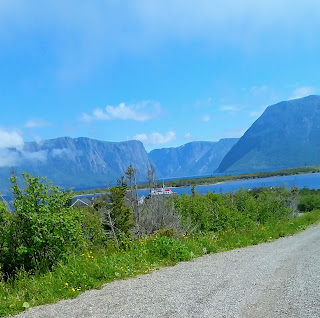 A photo of the Gros Morne ferry house and pier in the distance with the fjord of Gros Morne behind. The long boat ride through the fjord was spellbinding. An extraordinary place. So many incredible memories gathered on our trip. 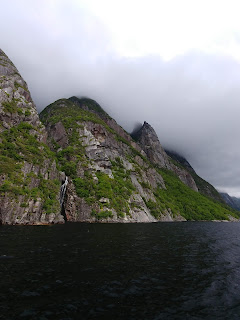 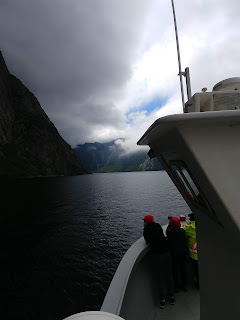 Grief takes many forms. I need to lay it out there and I find myself immobilized, staring at walls for gawd knows how long with nothing going on inside my head. Just blank, like white canvas.

I'll write about the trip later. I took copious notes.

But on a ferry going to Blanc Sablon I got the news that a best friend had died.

He had cancer, it was expected, but that doesn't assuage or lessen grief in any way.. He was one of my stalwarts, he was the brother I never had. We could spend loads of time together without getting bored. I valued his advice and his compassion and care.

Of course we had serious disagreements and massive differences in philosophy - he was a practicing Christian, I am an atheist.

But we listened to each other and didn't judge. He was a perfectionist, liked all his ducks in a row and hated surprises. I am completely the opposite.

Our long, long friendship, enriched my life in countless ways. I was at his online funeral yesterday and bawled my eyes out.

The last card he sent me was about a month before he died: 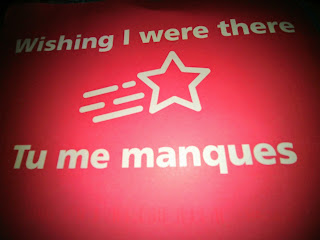 The real price of aging is the dear ones departing leaving us bereft in so many ways. I wrote this on the passing of another dear friend in 2009 which was read at her funeral and it applies to all inconceivable losses.

Death is only for the living:

The bereft left standing there

Of your vanished vitality.

I took this photo of R on a beach around 10 years ago where we had a picnic and I presented him with a bucket and spade to build a sandcastle. 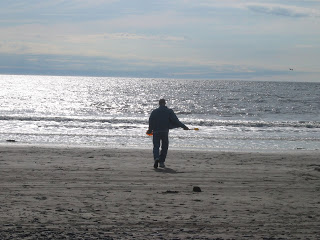 Farewell dear R - one of a kind. Forever missed.