Funny how a playlist can pierce my heart. A theme pops up in a mix and it grabs me by the throat. As it did just the other day.

I remember playing this as I left a beautiful beach with Ansa, my beloved rescue dog-companion. We had been playing ball and chasing some shore birds. And the glory of a sunset was just beginning.

And this piece of music popped up in my Ipod in the car afterwards.

The movie theme from "On Golden Pond". Henry Fonda's last film for you movie buffs. Henry and Katharine Hepburn, his co-star, both one Oscars for their roles.

It had been a couple of years since I moved to Newfoundland.

And there was a rush of feelings, an ecstasy if you will, as I realized this was one of the happiest moments of my life. Being here, in this place, by the ocean, breathing in the glorious sea air with this happy dog. There was no better place but the right here and the right now.

I am so grateful for those musical moments, of which there are many in my life. And I like the forgotten feelings they generate. 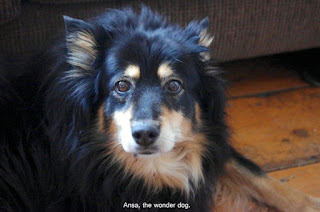 Did you have any such moments? I'm not talking weddings or child births or meeting your one true love. But where you're all by yourself and just feeling the glory and wonder of this universe?

Oh Woe Is Me 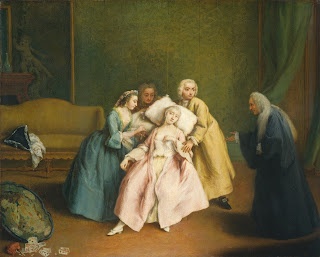 I had a couple of other posts prepared (in raw unedited stages) but I've thrown them on the blog scrap heap.

My overall health has been of a really depressing nature lately and my doctor confirmed today my haemo is on a serious downslide and has dropped from 115 to 85 in a very short time frame. So that explains the complete lack of energy and the sadness of having to miss my birthday celebration a few days ago.

So he's sending all the latest lab work data to one of my specialists (who coincidentally called me two weeks ago to insist on the scary test I was avoiding because of my fall) instructing him to put utmost priority on said test.

If I sink lower than 85 I am to take myself to hospital and get immediate transfusions.

So that's the reason for blog silence.

I managed an excellent whingy-whine at the doctor's. He was completely sympathetic to the madness of this ongoing, unresolved, half-life I'm living for far too long.

Sometimes, all we need is a few drops of sympathy to prop us up and prevent us from curling into a fetal position on the floor. 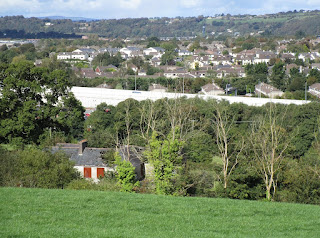 The new suburb then.

The smallest of reflections on how we got here (see previous post).

As a child, I lived in one of the first suburban areas of Cork City, the site of a small village where surrounding farms were being sold off and the suburban phenomenon of tract housing was levelling and concreting the landscape.

We were new to the development and arrived from a small town in East Cork where we were surrounded by relatives and community activities.

Here the landscape was strange though for a little while, we were still surrounded by lowing cattle and harvesting of crops but knew nobody.

We had no car and no phone. Our house had a fireplace in every room and a tiny gas stove in the kitchen along with a small coal stove which heated the water. Out back there was a coal/turf shed. All those fires had to be lit sparingly in winter to keep us warm. But it was the lap of luxury for my mother as we had left a third floor cold water flat in the small town.

There was no washing machine or dryer. My mother had to wash everything by hand. There was no fridge. There was a "cold safe" out back behind the coal shed which kept meat and vegetables "cool" with a mesh door. My father, a government employee, grew our winter stock of vegetables in the large fertile (a former farm section) back garden.  My granny would get on a bus from her small village holding and often bring us chickens and the blessing of a turkey at Christmas, which would be hung in the cold safe. We would have to pluck them and save the feathers for cushion fillings.

Mum made most of our clothes and "cut down" my father's old trousers for my four brothers and made my dresses. She knitted our hats and sweaters and gloves. Hand me downs were part of our existence. There was no shower and the bar of soap was used for hair and skin in our weekly baths. Toothpaste was in a tin which seemed to last forever. It seemed to me, looking back, that we shared one toothbrush which was only replaced when there were hardly any bristles left. Combs and brushes were communal. Shoes were repaired. Clothes were darned.

The village had everything we needed, a butcher shop, a small grocery shop, a post office and a pub. And milk was delivered first thing in the morning and the fresh bread was delivered in the late afternoon. The post was delivered morning and evening. There was no garbage. None. No plastic bags. Paper was used to wrap school books, or fire starting. Baskets and cloth bags for daily grocery shopping down the road. We had a compost heap for kitchen waste.

Excursions to town were on the bus and were rare. Usually to get us new shoes or in later years school uniforms. Our best clothes were for church and our wardrobe holdings were slim. My mother wore a shop coat over her clothes to protect them  as she did her chores in the kitchen.

My father cycled to work, about two miles into the city. The money saved on transit was put towards our annual holidays on an island off the coast of West Cork which was completely primitive and had us shoeless for the summer running all over the place with no supervision and swimming all day. It was life changing in so many ways and fostered in all of us children a deep, compelling love of the ocean and for self-entertainment.

All this to say, life was way simpler then. A movie was a treat. Radio was entertainment at night. There was no television. Library visits were Saturdays. I remember hauling out 10 books for the week.

Consumerism and retail therapy were unheard of.

Television and its commercials changed much of that. Our first one was installed like a god in the dining room in the early sixties. Our minds were filled with the American lifestyles shown on this magic box. The endless closets filled with clothes, the fabulous kitchens, the huge living rooms! The cars! Shampoo!

We all looked around and saw how shabby we were, how impoverished, how lacking in the luxuries.

And by gum, we were going to get our share of it. Or more. And we did.

Ant thus we lived happily ever after, amen. 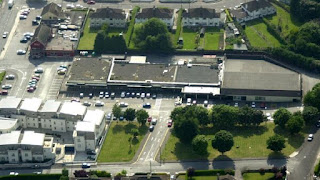 The suburb now.
Posted by Wisewebwoman at 2:46 PM 28 comments: 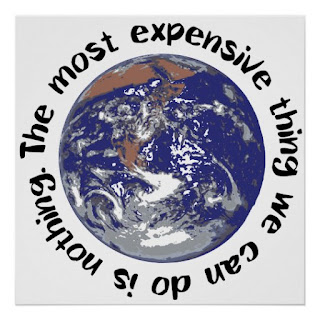 Conversations on the weekend circled around the inevitability of our extinction. As we have passed the point of no return in our extinction plan.

The latest UN report confirms this.

"Earth’s climate system is changing across the entire planet and human activities are worsening its effects which are “widespread, rapid and intensifying”, according to the latest Intergovernmental Panel on Climate Change (IPCC) report.

"The report by leading climate scientists published on Monday provides evidence that “unless there are immediate, rapid and large-scale reductions in greenhouse gas emissions, limiting warming to close to 1.5 degrees or even 2 degrees will be beyond reach”.

"Such as a scenario will come with inevitable catastrophic impacts over coming decades for human populations, especially in the form of extreme weather events and rising sea levels, the report’s authors have warned."

I'm not in fear of all of this and I don't share the opinions of many, e.g.

(1) There's an afterlife and God/Goddess etc. will save us all.

(2) It's another exaggeration to curb our Free-Dumbs.

(4)Glass domes over cities with AC will ease the worst of it. (I'd like to see that!)

No one thinks of the climate refugees escaping from waterless environments and the devastating effects of forest fires. California has never experienced anything like them, along with BC here. And massive food shortages.

I spent time in a roasting hot Labrador this summer - no one had ever experienced that kind of heat up there.

And the humidity and heat on the island of Newfoundland this summer is extreme and unique. And grain is being grown for the first time. And our iceberg season was pitiful.

The flooding is alarming everywhere.

We've all been warned, of course, of this end of days, but nothing of any major reversal has been done to halt the rapid progress of warming oceans.

Capitalism roars on. Gas is supreme still. The plundering of the Amazon (the lungs of the earth) continues

I compare our slumber to the Three Wise Monkeys of old. 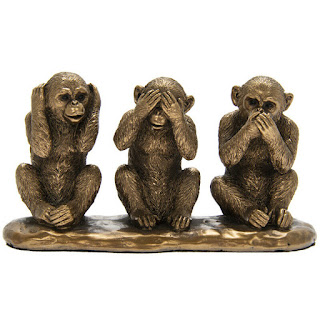 Not that us individuals can do anything at all. But I do wonder who else is giving any thoughts to what is going to happen and if you are, like me, resigned to the inevitable and hoping that whatever cataclysmic event wipes our little section of the planet into extinction, it doesn't hurt too much. But then I'm old and may pass before everything gets worse.

Or maybe, just maybe, the new virus variants will take us all out first.

Another excellent read from Science Daily.