Rage Against the Patriarchal Machine


It's the third day of it and I don't know what triggered it. Perhaps an accumulation of patriarchal rights and ownership over and of women. I hesitate to write here as I wait for it to subside. I mean the rage of course. And it hasn't. So here I go. The journal isn't doing it for me so maybe the blog will.

I asked a friend this morning, she's 83 today, does she feel rage? A rage that leaks angry hot tears, a rage that trembles the hands and falters the feet. Yes, she said. Her younger husband, second, love of her life, five years younger, died a few years ago. Some disorder of the blood, the body. they had just bought their Newfoundland home. Had B&B plans, he was a great cook, she a wonderful host. All smashed to bits in a four week hospital stay.

Oh good then, I'm not alone in my rageful week.

My rage is against male ownership of women. Triggered in no small part by what's happening in Iran. A young woman, showing a few stray bits of hair beneath her hijab jailed and killed. The protests are mighty. More women killed for protesting. For not covering their heads properly.

And this all whirled me back to my own adolescence in the fifties and my hair becoming an "occasion of sin" for leering men and boys unless I covered it with a mantilla for mass or confession or hell and damnation retreats or.....Catholic Ireland where women had no voice.

An occasion of sin. I imagine this twisted logic is applied by Iranian men. Women with uncovered heads tempting men who are otherwise pure and unsullied by sinful thoughts.

The Machine of the Patriarchy. Making young girls and women feel dirty and ashamed and the object of unbridled desire from male human animals who can't control their baser instincts, their desire to rape, at the sight of a stray hair on a woman's head. All her fault if she's gang-banged then. She and only she has released the male rampaging raping monster by not covering her head. Only herself to blame.

So I was taught. So I believed. I lived in fear of men having been molested by an old fellah when I was barely six. My fault. I sat on his lap. I released his carnal instincts. Life long trauma submerged until I had therapy in my forties.

Raised like this, objectified because of our sex, women bury their rage. My mother had ulcers in her forties. Ulcers are repressed rage (as many have it). Some exhibit depression, the internal mirror of rage (looking at myself). I knew she was angry for many valid reasons. Because she was a woman with no voice. Except to me. And she died young.

Rage is the best weapon we have. My sheroes are in Iran and other cities now. Protesting loud and long. Not afraid to show the rage.

I am hopeful the rage spills out over the USA for the mid-term elections and the declaration of ownership of women's bodies by their "Supreme" Court. Note quotation marks. That it spills out all over the world to right the grievous wrongs that have been done to all girls and women, second class citizens, victims of a patriarchy intertwined with religions that deem them unworthy of equal status.

This is a photo taken by Ray Mackey of the city of St. John's, Newfoundland, at night. 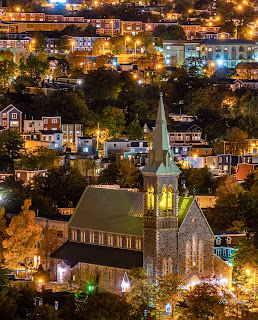 This is the city during the day. 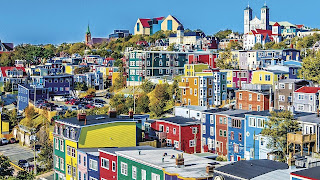 The harbour is spectacular and we have ships coming in from all over the world. 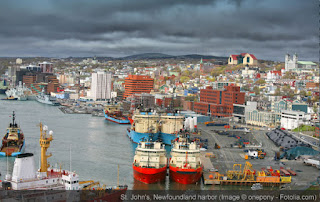 Nestled in the city itself is an active fishing village called Quidi Vidi which is beside where I live.

A photo, courtesy of Gerry Boland of Cabot Tower, which I can see from my window. This is the site of the first transatlantic radio transmission in North America by Mr. Marconi. The dog in the picture is Chief, a fixture on Signal Hill for many years, a gorgeous friendly Newfoundland purebred who sadly died a month or so ago from cancer. He and his owner will be missed by everyone. 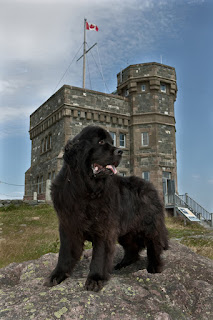 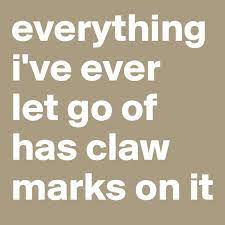 I've had to let go of many people, places and things in my life. Like many of us. Marriages, relationships, friendships, jobs, houses, a country, a province.

It's never easy. And I'm not forgetting my addictions either. The claw marks are enormous on those, bleeding profusely.

Old behaviours that didn't serve me well. And oh yes, the blame game to avoid responsibilities. The lack of discipline in some areas of my life. Procrastination - there's a big one. I will never understand people whose lives are in perfect order, dishes done, floors swept, beds made every morning, yoga to start the day followed by organic granola and fruit in a delicate hand made bowl. I want to put them under a microscope to study them, to see where the differences lie to see if I could grab a gene or two. I tend to be a reactive housekeeper. Advice I pass on is to have people into one's home at least once a month to keep one's house in order. It works. Also the timer. Set the time for whatever number of minutes you choose and just do some of the grunt work during that time. You don't have to finish. That's been a lifesaver for me. I don't have to do all the dishes. Just five minutes worth or whatever.

Loss of of good health is a major one. I would take mine for granted. Not any more of course. But by far the biggest is knowing that the former ability to hike miles, to run miles is gone forever. Mobility, eyesight, failure of internal body parts are the norm.

To cease fighting aging is an ongoing battle. Some days are better than others. My one wild and precious life is consumed by doctors, lab work, medications and, yes, looking for sunshine where I can. If I remember. On good days I do and on "bad" days not so much.

I celebrate what I still can do, write, knit, read and socialize when I can and when I feel safe. Ongoing Covid and world issues are almost too much to bear. We've made a right bollox of this fragile wee planet and there really is no coming back. As we say out here on The Rock - the arse is out of 'er. 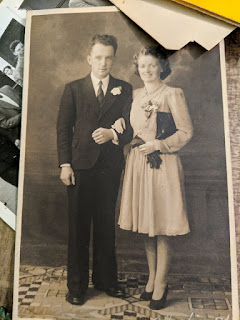 As we age, memories are often in solitude. Those that share them are gone, or as the eldest of six, I carry some of the better memories of my parents alone as all their siblings and friends have passed on and my siblings knew different parents once we moved to the city and five more children entered the picture. My mother died in her fifties, having been sick for five years with her youngest only just turned fourteen.

I first knew my parents as a young couple and I was the only child for well over three years. I do have an astonishing memory, both in detail, location and events. And I often recall whole conversations. They were avid cyclists and my dad had built a special seat for me on the crossbar of his bike. And I remember the picnics and excursions so very well and going fast down hills with dad making fierce noises. Their joy was to make me laugh and I delighted in their antics.

They also were part of a choral society and often held rehearsals in our flat we had in a small town in East Cork. I would hear them at night singing wonderful songs of old as they both had fine voices.

They were both avid readers and instilled in me a life long love of books.

The years were post war(called The Emergency in neutral Ireland) and rationing of just about everything was the norm.

Relatives would drop in regularly, my mother’s parents and three of her sisters and two of my father’s sisters who lived in the town and they loved to show me off in the various homes they would drop in on. That was done then. No calling ahead, everyone just dropped in in that phone-less era. And everyone always had treats for visitors, hard as they were to come by in the post war years.

Dad was very well known as he was the town clerk then and we couldn’t walk down the street without someone greeting him and arranging to go to various football and hurling matches on the weekend.

I continue to be astonished at the complex music they would sing together, sometimes just for me, sometimes when a crowd was in and music was the accompaniment to the evening’s socialization.

And I can recall the lyrics and melodies of their repertoire so easily and hear their voices as if it was yesterday and not 75 years ago.

Here's one they would sing together:

My father was a great fan of Richard Tauber who sings it here.
Posted by Wisewebwoman at 5:57 PM 25 comments: