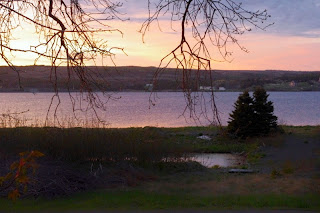 My front garden, at sunset

Well, it isn't really a word used by us English speakers, is it? But I do like the sound of it.

I think back to the days in Ontario when I knew a few female alcoholics and when they introduced themselves thusly: "Je suis un alcoolique", I would think to myself: that sounds so much more fun, so much more glamorous, so much more carefree than "alcoholic".

A couple of web friends have kicked the bucket. One out of Limerick who died in January (of a brief but unremitting cancer) but my FB feed has a mind/agenda of its own. Posts normally at the top of my lists get subsumed by the bots at whim to the nether regions. This is what happened to my friend John's obit news. He was one of Ireland's foremost atheists, a never ending battler for women's rights, a wit, an artist of some renown and a scholar and a gentleman. We'd had some pleasant exchanges over the years. Some Irishmen just make me proud. He was one of them.

Mike I'd followed for many years due to his online magazine, his documentaries and a radio show. He ruminated on many topics - ranging from oil as a finite resource and the underlying conspiracies of corporate interests in political affairs. I had been an admirer of his for about 13 years and befriended him in his transition to FB. Since he has died - by his own hand - some troubling facts have come to light in regard to his declared sobriety (he wasn't), a sexual harassment charge, and his extreme paranoia resulting in a self-inflicted gunshot wound when he'd wrapped up his last radio show. So my opinion of Mike, and now his political slants, have taken a jolt.

Sometimes I do wax nostalgic for simpler times. But were they ever simple? I look at the pictures of Old Cork, a new group on FB that has brought such richness of historical experience to my home city via these thousands of old photos and movies. Many now vanished train stations and trams, unsullied strands, majestic ballrooms, shoppers in hooped skirts, all looking innocent and almost childlike. But I also remember the slums of Cork, now thankfully no more, where lonely old women ate meagre food on tin plates with the damp running down the walls. As "Children of Mary" in secondary school, we would have to visit these old people in their tenement rooms and bring food and clothing to them.

At times like these, I need to step out of Nostalgique, a fine place to visit for sure, and pour myself a stiff cup of reality laced with a hit of cynicism.

Back to normal, in other words.


Posted by Wisewebwoman at 9:43 PM