(1) I don't know about you but I get invigorated when I go out with a placard and protest. Which I did today. And we had massive media coverage. There was a great big pile of us protesting the appalling conditions of our roads. Unfit. Unsafe. Hazardous to people and vehicles. Don't get me started on what I've already spent on tires and rims shredded by the potholes craters. We'll see if we're heard. Maybe we need to throw ourselves across the road the next time if nothing is done. I thought those days were behind me. But I'm delighted to report: No, they never will be. We amused ourselves by planting trees, fairly large ones, in the potholes. Great for TV camera optics.

(2) Conversation with Leo, my sorta handyman, wood bearer and scavenger.


L: Do you know anything about Chuck Connors?
M: Rifleman!
L(delighted with me):Ya you!
M: Why did you ask?
L: I'd like to know more about him. So I can have a conversation with people. He was born in Newfoundland.
M: I can google him on my device, look!
L: No, it can't tell you everything, like who his parents were and stuff.
M: Yes, it does, look. Parents were Marcella Lundrigan and Allan Connors both from this area of Newfoundland. And get this: Chuck's real name was Kevin! He was born in Brooklyn, New York.
L: Can you repeat all that so I can remember it forever.
And I do.
L: I must get one of those googly machines.
M: Anytime Leo, I can do the asking for you.
L: It's magic.


(3)Daughter won a small cash prize and she's treating me to a replica of a Titanic Meal this Saturday night. Here, take a gander at the menu, click to enbiggen: 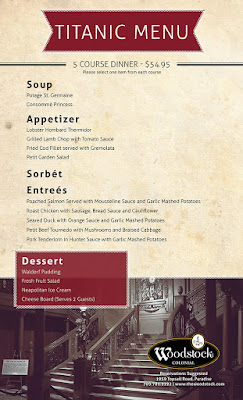 We're going to scramble around in our closets and find some old fashioned clobber to wear to match the event. I don't even own a dress anymore. Seriously. I'm a jeans woman. And black dress pants. So I may have to buy a long skirt and some pearls.

(4) My grief counsellor asked me to write about a traumatic event that took place in January 2015. I haven't been able to write about it, I would go into a state similar to of PTSD, shaking, crying, wanting to hurt myself physically. And then it all flowed out of me yesterday afternoon. And I finally realized what had happened to me. I was a victim of gaslighting. More later on that. But a mighty load was lifted. Mighty.

Posted by Wisewebwoman at 10:22 PM