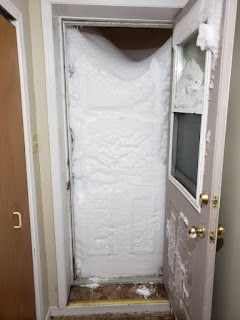 It's been dubbed #snowmageddon2020 and fact is I have never experienced a worse winter storm.


As of 11am, the Mayor has declared a state of emergency. All businesses are ordered to close and all vehicles are ordered off the road except emergency vehicles. Please return home until the order is lifted. #nlwx #nltraffic

The city has never been closed down before. We are tough out here on the Edge.

A state of emergency was enforced in St. John's. All vehicles and humans off the roads. The winds roared, the snow flew horizontally, the biggest fear was the power blowing out. It didn't. thankfully.

here is a sample from downtown where many reporters holed up in a hotel. No one could get to their homes outside of the city.


Our local CBC radio station died with no power and the batteries and/or generators weren't working either. The staff were trapped inside of the building overnight sleeping on the floors and wonder of wonders, hooking into CBC Halifax, Nova Scotia, to keep us company for the entire time. It was extremely comforting hearing stories from call-ins. Farmers and stable owners, sleeping in their barns keeping the animals calm. Many opening their doors briefly to catch the awful sound of the peak 167km/hour winds. Windows completely snowed over. Just now the sun came out after over 24 hours of non-stop intensity and partially melted two of my panes: 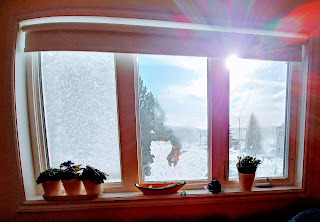 the plows were taken off the roads due to the danger of being unable to see the road edges or heaven forbid, near the open ocean. 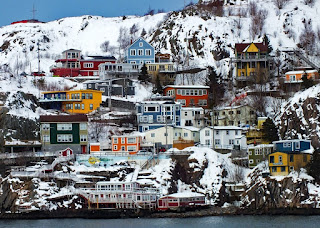 The historic Battery area was evacuated as there was an avalanche which fell into the backs of the houses shown here. No human injuries thank goodness.

And this final story:

Not the baby - but this woman should be premier of this province. She gets things done!

PS, we're still on emergency status here but there is snowboarding on the streets (we're very hilly, a la San Francisco) but we have bright sun.

How innocent the world looks after a storm!!

Posted by Wisewebwoman at 1:20 PM