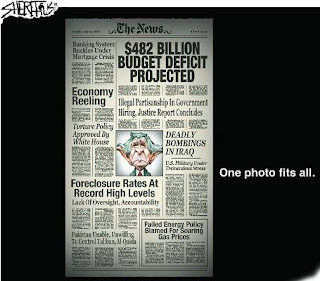 It seems there is a new terrorist lurking to strike on the U.S. And this will be a devastation beyond any current threat calculations.

China's holdings of U.S. securities have increased from $300 billion in March 2004 to more than $900 billion in June 2007, the latest date for which data are available. Given America's $250 billion trade deficit with China over the past year and the steady stream of money pouring into the country from abroad, economists believe China probably holds nearly $1.2 trillion in U.S. securities today, mostly Treasuries and corporate bonds.

And that doesn't include the roughly $140 billion in U.S. securities held by Hong Kong.

Meanwhile, China, particularly through its central bank, has become the primary financier of America's budget deficit by using much of its trade surplus with the United States to purchase Treasury debt. At the end of fiscal 2007, China owned 21 percent of the U.S. publicly held debt that was owned by foreigners, and it was buying more than half of the new debt being issued by the federal government.

"What's most disturbing about the U.S. situation is that as America's debts rise higher and higher, the less influence the American government will have over the critical decisions" that will need to be made to address these imbalances," Mr. Tonelson said. "Those critical decisions will be made in Beijing, not in Washington, and they will be made to promote Chinese economic and national-security interests."

Read more of the same here.

With this kind of financial/debt imbalance U.S. autonomy is just about eroded.

We can all look forward to the new world power: The Empire of China.
Posted by Wisewebwoman at 12:51 AM