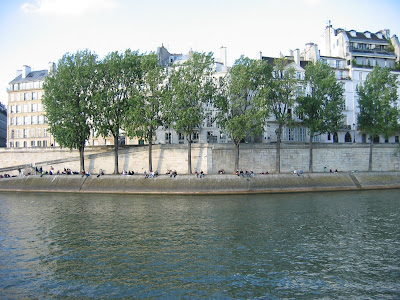 (Picture is taken from a boat on the Seine last week.)

It seems like forever since I’ve been here, and I’ve missed reading my blog-buds’ posts which I will get caught up on over the next few days.

My time there was awesome, met with all I had planned to meet (with one regrettable exception) and the weather was totally accommodating. I completed the Dublin Women's Marathon and was duly medalled. My family came up from Cork to spend a couple of days sans spouses (thanks, in-laws!) so that the four (the other two are far flung at opposite ends of the earth) of us who got together felt like kids again and celebrated at midnight by taking a horse and buggy through the streets of Dublin, clip-clop, clip-clop resounding off the cobblestones and buildings as we tipped our virtual hats to the ghosts of all the more famous and patriotic who had gone before us on similar conveyances.

I don’t think we ever stopped laughing. We’ve planned a major re-union in 2011, back on the land of our mother’s ancestors on the Beara Peninsula. Guess who’s in charge of the newsletter and the T-shirts?

Dublin is a little more humbled, a little more down-to-earth and I found it refreshing. A combination of the demise of the Celtic Tiger, government corruption and the Ryan Report. Reality checks are filtering through but people are optimistic and actually looking forward to a saner time more in keeping with old values. Both of the brothers are planting, one has even gone so far as to acquire a flock of sheep (he’s an accountant, like me!) and we discussed cows and chicken coops to our heart’s content. My sister was seeking advice on tilling her urban garden and starting her self-sustaining lifestyle. We were all on the same page, as the saying goes.

One of the many highlights was a niece, sending a 3D picture of her unborn child to my brother’s mobile as we were having lunch, with the caption: “Hello, Grandad!” It will be his first and it was an emotional moment for all of us but more so for him seeing the little face and hands. Isn’t modern technology a marvel, we all said.

A major change for me since last time was the accessibility and sophistication of public transportation. I seriously think Dublin has to be on the cutting age of transit between Dart, Luas and Aircoach which brought some of my friends up from Cork in a matter of hours. My family chose the train and Luas as their methodology. When the oil crisis hits, Dublin will be just grand, thank you very much. Other cities take note.

There is so much more to write about but for now I’ll end this first episode. I’m delighted to be home back on my little corner of my little universe. It took me a solid 24 hours of travel to get back here from Paris. 24 Hours! But I napped so much on route that jet lag was deleted completely.

So what have you all been up to while my back was turned?
Posted by Wisewebwoman at 3:35 PM