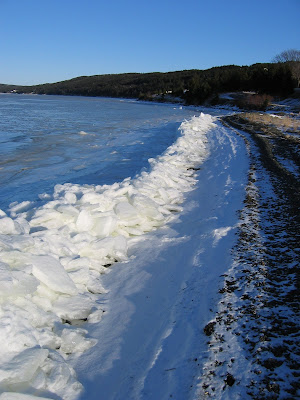 That’s what the man said as we looked out over the sparkling bay. He pointed at these odd ice formations which looked for all the world like paving stones, piled up on the shore line.

“These are called Bella Carters,” he said.

“Bella Carters?” I said, the word being new to me, a mere CFA, always captivated by the wonderful words I hear around me at the edge of the Atlantic in Newfoundland. “Can you spell it?”


“Well,” he said slowly, he always speaks to me slowly as if I’m a rather dimwitted child, “I never did have to write it down but that’s what my daddy called them, and his daddy before him.”

I fell upon my dictionary once I came home. The Dictionary of Newfoundland English. Previously written about here. No Bella Carter listed. But under bellycater it says go to ballicatter. Which I do. In my slow-witted way.

And oh my, it gets a whole half page of space, this word.

And here’s the meaning I’m looking for:

“a narrow band of ice, formed in winter in the saltwater along the foreshore or landwash. Large slabs, chunks and fragments of this ice after break-up.”

And I attempted, with the photo, to give you an up close and personal look at Bella Carter.

Isn’t she gorgeous?
Posted by Wisewebwoman at 7:32 PM