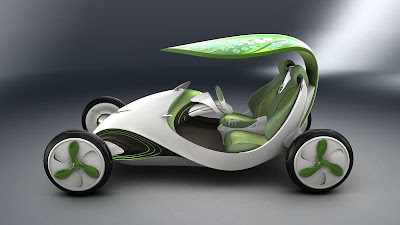 Imagine if you will a car that absorbs C02 and expels oxygen.....

Chinese automaker Shanghai Automotive Industry Corporation is doing just that. They recently unveiled designs for a photosynthesizing concept car that could take in carbon dioxide and produce oxygen. Details are still sketchy, which is understandable since it would basically be a leaf on wheels.

Read more about it here - and other innovators, such as MIT, are also developing similar models.

I want one now! But hang on a sec, - shouldn't it have, like, doors and windows for the winter storms of Newfoundland? Or do I have to hammer up my own?

Great golf-cart possibilities though!
Posted by Wisewebwoman at 1:01 AM