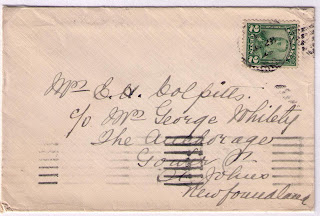 We have an odd arrangement for postal services in my wee outport. Some families receive delivery to their homes, other, 'newer' (from fifty years ago and sooner) families have to go to their designated PO Box inside the post office and use a key to retrieve theirs.

All well and good, one might say. Except the sole post office master also runs the hardware, grocery and gas divisions of the store and has to go across the street to his house for housekeeping reasons and shut up shop many times during the day, without notice.

His hours are mysterious and unposted on his door. He is often spotted behind the counter cutting up vegetables for his dinner on top of outgoing post. And slicing cheese for sale in the shop with no protective gloves, hairnet or sanitized surface.

I could write a comedy about the post office. But I have to live here after all. But to gutsplitting laughter I have performed a skit for a few close friends on how it all operates. I won't even start in on telling you now how the post office became computerized. That is an entire post by itself.

Yesterday I go to pick up my mail and as usual the flyers are jammed into my box and the legitimate mail has barely enough room to fit. On top of this there is the baffling card ("parcel behind the counter for you!") which I hand to Peter (not his real name). His tongue finds his cheek as he puzzles the card and he looks under the counter, over the counter, into a box full of how many unfortunates', and possibly long dead addressees', mail.

"Well I did receive one parcel in the mailbox" I say to him helpfully.

I hand it over.

"Ah that's it!" he says, fussing with his computer.

"How do you know there aren't two parcels?" I say. I have long since developed an enormous tolerance for the weird happenings in my post office. I no longer wear my Big City Girl Pants. And notice how I haven't even gotten into outgoing mail challenges have I?

"A good guess." he says, leaving me wondering when I will get the call that he found the carded parcel.

"Look Peter," I say as I leave, "You must be forgetting. I don't want the flyers, they cram my mailbox, I don't read them and the paper is too shiny to burn in the woodstove so they end up in the trash. I just hate the waste and...."

"You keep asking about that," he says, "For years now."

"And you keep saying you will take care of it. I know you're busy...is there anyone else I can call about this, like head office?"

"If you don't mind me asking, what do you have to do to stop it going into my mailbox?"

"It's simple really," Peter leans over the counter confidentially.

"I put a red sticker on the backside of your mailbox for the postal guy to see and he knows not to deliver the flyers."

"Could I help you then? Could I go into the room and put the red sticker on for you?"

"I wish it were that simple, girl. I really do."

"You mean I can't go back there, like rules are rules?"

"No, I ran out of red stickers a while back."
Posted by Wisewebwoman at 12:55 PM