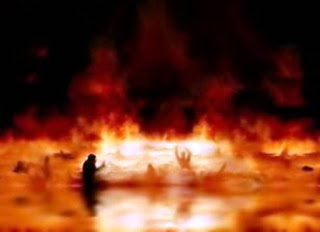 My grandmother held an Irish wake for her eldest daughter (my aunt) who eloped with the local protestant minister. This from their small Irish Catholic town. Subsequently, the whole family was denounced from the pulpit by the compassionate parish priest who accused them all of harbouring a harlot. Then my father, her brother, lost his position as the head altar boy. And another one of his sisters was refused admittance to the convent because of her shameful family. This all happened in the early thirties of the past century. My grandmother and grandfather never spoke to their daughter again. They say she broke her father's heart and sent him to an early grave as she was his favourite.

A few years ago I phoned an aunt (now deceased) to cry on her shoulder about Missing Daughter. I knew my mother, if she'd been alive, would have sorted it all out. She had that way with her. So telling her sister made sense to me. Even though she lived in London, England. She wept with me. And then told me one of her grandchildren had done the same thing. Fled to Australia with a boyfriend, severing ties with her parents and by extension, her grandparents. She could only offer me empathetic tears, no solution.

We're a very fragmented family, our family. Very rarely is Missing Daughter mentioned. Except by one or two, who always ask for news. Whether this absence of support is a genetic legacy or cold-hearted 'I'm alright, Jacks'. I don't know. I don't care. I'd sure like to fix it though. Inject some compassion into the dispassion. Heal it up a little.

This whole post was triggered by a long, sobbing message left on my voicemail by Daughter while I was out yesterday. She was in Montreal and missing her sister so much she had to call me in floods of tears.

And ended her message with this:

"Mum, I can't imagine what hell you're going through without any family support. At least I have you!"


Yeah, hell would be a good term for it. Forget about those fires those compassionate parish priests talked about.