The Famine and the Laundries 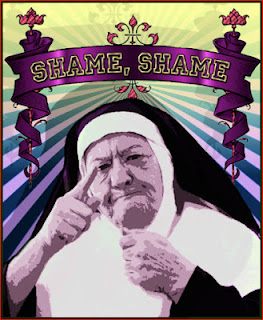 I had a long, long conversation with a good friend in Ireland yesterday about the Ireland we grew up in, the Ireland of shame, guilt and sorrow.

I can't have conversations like these except with "one of my own." One who was brought up with the almighty grip of the Catholic Church running the lives of all around us. A grip that despised women and hated their children even worse. Where sex was a filthy word and if you had a "flirtatious" personality and were incested by your father or uncle or brother or raped by the parish priest you could be committed to an institution that would work you from dawn to dusk. Slavery by another name. Tiny children imprisoned and working their fingers to the bone. The government was complicit in these incarcerations. No surprise at all. Fear was a constant companion. An innocent walk with a father would result in him pointing out some of these grim gray buildings with barred windows in the middle of the country where "bad" boys and girls, some as young as 5, could be thrown, never to see their families again.

My friends, you have no idea. I'm just giving you the very spit of it, a wee taste.

To read more of it go to Bock the Robber's blog today. He connects the Famine (a genocide actually) and the Laundries in a way I've thought of but could never articulate as well as he has. He does it beautifully. Savagely. And succintly.

Crushed. Demoralised. Three to four million native Irish speakers removed at a stroke. Its culture eviscerated by emigration, starvation and disease, thanks to a government in London that believed in tooth-and-claw laissez faire economics. A government whose only interest was the wealthy merchant classes, and the devil take the hindmost.

This is an Ireland far, far removed from those travel posters and paddywackery.

And the horror percolates downwards through all generations of my country.

Ask anyone there, ask me, what their families did to survive the famine and you will get a blank stare. We just don't know.

One of my family members ran one of those laundries.

And my highschool mini-choir would go to the institutions to sing for the unfortunates. But we were forbidden to speak to them and they to us.

And we knew our fate if we stepped out of line.

Posted by Wisewebwoman at 12:09 PM