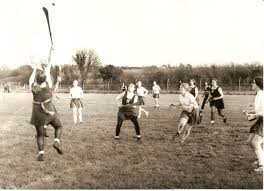 I sometimes go into things expecting huge battles. I don't know where I get this girding-my-loins-for-a-war mentality. Perhaps in childhood. Girl children in my time in the Catholic Ireland I grew up in had to choose their fights carefully. We had outlets on the camogie front, of course, and if you think camogie is like field hockey, think again. if you ever saw a hurling match you'd get the picture.

Camogie was the female version of hurling. Back then, in my time: No protective gear, no fancy sports bras, think thin black plimsolls, skirts (yeah skirts - and underneath regulation bloomers) and best of all? Black nylon stockings! It was a viciously tough game, where ankles were shredded and fights broke out at every game. We did not repress our rage. We took it out on the opposing team in camogie. Of course now they've fancied it all up with helmets and knee pads and ankle protectors and elbow protectors. Not in my time I can assure you. I had a foot broken and a finger broken. Others had teeth smashed, ribs shattered, one girl had two casts simultaneously on her arm and her leg. We raised Irish women right tough in Ireland back then. We came by it well through Cumann Na mBan the Irish women's military organization formed in 1914.

I was all girded up, in my recently new position, to go to battle for a new town hall, a performance space, a meeting place, a community party room. The old space was commandeered by the RC church. Even though the land was originally donated to the RC diocese by their parishioners and the old hall was built free of charge, etc., etc. All over Canada (and I'm sure in other countries too) the RC church is selling off 'their' properties and paying off lawsuits brought by the victims of the heinous perversions and horrors inflicted by those in their employ on innocent children. This whole reactive process by the church makes my lobes explode. Now the seniors, who contributed so much over the years to the support of their local churches, are unceremoniously turfed out of their card games and little tea dances, etc., and have nowhere to meet courtesy of these very same churches. Bloodsuckers. Don't get me started. Well, I have, haven't I? I'll stop now.

So here I am fighting for a space for my wee town so that we could have a non-denominational meeting hall, small, granted, but enough.

I get an estimate to convert an existing building into a wee village hall - the space will be lovely, light and airy - and now - and I'm really over the moon about this - the powers that be approved it tonight.

It turns out I was the only one in this anticipated battle.

Posted by Wisewebwoman at 11:25 PM