Bless Da Webz and All Who Sail on her. 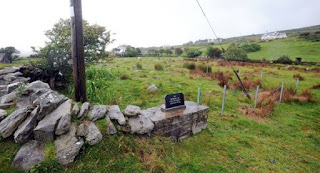 Thank you Irish Examiner for this photo of a cillini

I was commenting on a friend's FB page, you know how that is. The chat was about all those nameless unbaptized babies buried in remote, separate burial plots all over Ireland. Tossed out like so much rubbish. There are thousands and thousands of such little babies. Read all about it here.

Can you imagine the grief of the parents? The RC church again and its superstitions and exclusions. When anyone says "Oh, it was the times" I always respond with "where was human compassion and charity - or are they just recent evolutionary traits in the human race?"

So well. I mentioned a cillini - a burial plot (if you could call it that) on an island off West Cork, where the unbaptized babies were. A large walled area without a stone or a cross or a sign. Rumour had it there were hundreds of such babies, stillborn, preemies etc. interred there. And some said those born severely handicapped were quietly done away with too. A haunted place for us children who explored it time and time again. These wee innocents were consigned to Limbo for all eternity, punished forever for something they had nothing to do with. Never to be seen by their parents even in the next world, whether heaven or hell. The cruelty of it all still has the power to take my breath away.

One of her other friends, not a friend of mine, came on board in the comments and asked me how he, a life long aficionado and visitor to Baltimore and Sherkin, had never known about this paricular cillini so I drew him a little map showing (roughly) where it was.

Then we got into this lively private conversation about Sherkin and our memories and the old people there and a small boat I would surreptitiously "borrow" and he in his turn did the same thing and the cranky lightkeeper who would chase us away from the lighthouse as he liked to go skinny dipping in Horseshoe Bay, and did I know about the island in WW2. It turns out he's over 80 and still climbing mountains. His age explains how our memories alight around the same people and places (and oh, what characters!) but he was that much older than me that our paths didn't intersect back then.

And educational, if you have the fortitude and interest to click on all the links above.

Posted by Wisewebwoman at 2:19 PM