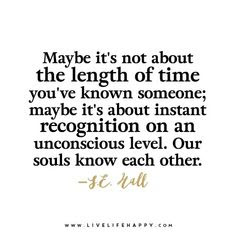 Have you ever had that experience? Meeting someone for the first time and feeling a bond, a special recognition and connection. An "I know you!" No, I'm not talking romantic love. And yes, I've had that instant lust a few times too.

I'm talking something else entirely. And it doesn't happen too often. And I'm glad it doesn't. Otherwise it wouldn't be that special, would it?

I was friends with this man, let's call him Donald. Not soul friends or anything. He was the brother of a close friend. She has many gatherings at her house and myself and Donald had this ongoing almost flirtatious relationship. We didn't see eye to eye on politics or religion or core beliefs but it was engaging and fun for others to listen to and watch. At another age, due to the sparks, we would probably have taken it further, as those mad days would demand, but even thinking of those mad days tires me out along with the idea of taking off my clothes.....

Anyway, Donald had one of those cancers that are insidious and invisible. He looked wonderful but his blood was in bad shape and he died, mercifully quickly, after several years of treatments and blood cleansing machines and chemo and gawd knows what else.

At the wake, a couple of months ago, I met his daughter for the first time, she had flown up from Boston for his funeral. And it was one of those things. For privacy, we went out to the parking lot and talked and talked. And hugged long and hard. And agreed, yes, there was a special connection.

She flew here a week ago and insisted I be invited to a family function recently and there I met her partner and her kids and that absolutely special connection was still there. I shared some of my art and poems with her and she showed me a special blanket she's making for her autistic son. And it's hard to explain, but we truly know each other, can see inside each other.

Loves her I do.

Posted by Wisewebwoman at 8:03 PM