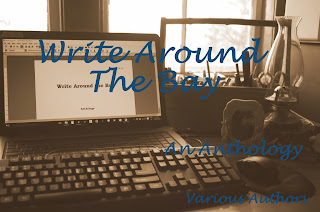 So the anthology is off to a friend for formatting. A virtual friend in California whom I met through an online writers' group. Da Webz: she is amazing. VF has since become a well established author in the sci-fi genre while raising four daughters under the age of 7. And helps out fellow authors with her expertise.

I like the cover which features my office and an old fashioned lamp and a photo of my parents which seemed to fit. I wanted to show modern technology in conjunction with the old fashioned timbre of some of the stories/memoirs/poems within it. The photo is meant to be blurry with clear text. Not sure whether it works or not even though I am enamoured of it.

I've never taken on such a humungous, soul destroying, exhausting task in my life. It ripped about a year out of my life between rewrites and revisions and formatting, repaginations, four levels of editing and banging my head off my own keyboard. I would never do it again. Sympathy and compassion (except from other writers) was in short supply along with the challenge of the writers' impatience to see the book in print.

I think it will sell well locally as it truly is a type of compendium I'd see in the old days. Bits of everything.

A few of my own and Daughter's pieces are in it. One writer pulled a piece that was her best: afraid of relatives' judgements. A lovely piece, sadly never to see the light of day. Her substitute piece never made the final cut as it was so inferior.

It's done now and I can move on to my languishing 3 novels and the CBC Short Story Contest.

Freedom.
Posted by Wisewebwoman at 4:20 PM