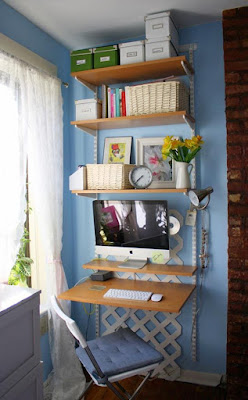 Possible concept for a minimalist desk.

I hope it's not a foreboding of bad luck but when I laid claim to my new dwelling, all suited up with preliminary baggage: the important stuff like the small French press, mug, dark roast coffee, cream, some basic pantry stock, a small table, chair, layouts, suggestions, wouldn't you know it the key wouldn't work.

Because it didn't I met two of my neighbours, Elizabeth and Carol, who endeavoured mightily to help me. No luck. Not even a twitch out of the lock. I called the administrator (not a super, no, he's an administrator) no answer, left a message. Schlepped (with difficulty) my stuff back down again to the car (the ladies offered to host my bits in their apartments but I declined) and waited. I don't know about you but as I age I find the Type A personality has not being paying attention to meditation and OM practices whatsoever. So frustration and a small pity party ensued. He called me within 10 minutes. He'd been at the hospital and left his phone in his car. Upside was he found another key in the office and told me there were trolleys and roll-y carts to assist residents in hauling stuff around. He took my baggage up and we did the transfer of keys.

So I made myself a cup of La Java Française and sat down at the wee table and pondered my new space. And pondered. And thought: cripes what have I done. And thought: this is all good. And once again, I forgot to take pics for Grandgirl. She is the space expert. Seriously. At twelve she was organizing my car. At fourteen organizing my storage space in Toronto. At 20 she travelled Europe for the summer with a small backpack. At 21 she taught in India for months with a ditto. A genius with space and minimum necessities.

As a boost I watched The Minimalist. Recommend. Seriously. I love the 333 concept too. Though I've been adhering to minimum clothes for a while. And shoes. I was comforted by both. Yes, I'm doing the right thing.

I set up an area in the garage today with a table and loads of boxes of all sorts of stuff for me to go through. I set it up out there as my tourist season starts soon. Leo is an amazing help for the lugging as I am no longer able. I've recycled so much paper, cards and letters already but there's still more. Frighteningly more. But not as intimidating as I feared. The movies and books are the next go-through, though I've donated a lot already.

So yeah, I'll get there.

Posted by Wisewebwoman at 10:14 PM