From my mother I inherited thick hair and good skin.

I also inherited her love of music, live theatre and reading along with a passion for needlework: sewing, knitting, crochet and embroidery. She was skilled in all 4 of these disciplines, I in but 2 but she would tell you that I exceeded her ability in those two: knitting and sewing as I took them further into designing.

She was a woman of her time, born in rural Ireland in 1914, traumatized by the explosion of her village barracks ("it shook the ground I was playing on") in 1920 when she was 6 resulting in her becoming a life long Irish republican. She was self-educated and was managing a large grocery store when she married at 28, thus thwarting any further ambition of her own {"he wore me down"). It didn't kill her thirst for learning and she could converse readily on the novels of Charles Dickens. She took advanced cooking classes and singing lessons when she was in her forties.

She found it easy to make friendships, her outgoing personality and overall petite prettiness and "style" attracted even strangers drawn to share their confidences with her.

She knew quality from a mile away and would advocate owning only a little quality versus a lot of cheap trash. She loved roses and hydrangeas and field mushrooms and blackberries and the sea. No matter the temperature of the water, she'd take one sight of the sea and before we could blink, her ever-ready swimsuit was on her and she'd be diving in, breathless, waving her arms telling her shivering children: "it's lovely, you'll warm up in no time!"

She was a true gameball as we Irish say. 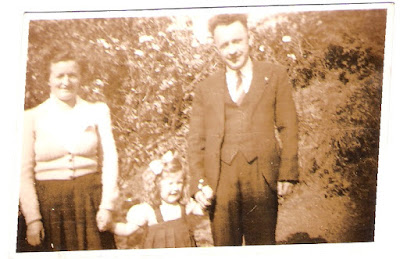 From my father I inherited bright blue eyes and one of those faces that shows visible displeasure when things are "not going our way."

I also inherited his love of words, new ones, old ones, complicated ones, words with multiple meanings and interpretations, words of obscure etymologies.

He gave me my first library card when I was 4 (he taught me to read) and our routine, every night after tea till I was at least 14, was that I'd sit on the arm of his easy chair and we'd complete the Evening Echo crossword together. I learned about newts and tors and bitterns. Later we played Scrabble and when we traveled together in later years we packed the Scrabble board for our after dinner game. Once, he bought a beautiful hand crafted turntable in a prison workshop in Maine which I still use for Scrabble.

He taught me knitting - he had 5 older sisters and had observed them. I remember his patience one time in a wool shop in Camden when I took hours poring over obscure old knitting patterns talking to him about Guernseys (ganseys) and Jersey fishermen sweaters and Aran patterns and Shetland wedding ring shawls and convent lacework.

I asked him once what he would have done with his life if he had the resources. He answered without hesitation: "I'd have created new varieties of roses."

And then I realized, for the very first time, how he and my mother were drawn to each other.
Posted by Wisewebwoman at 8:25 PM