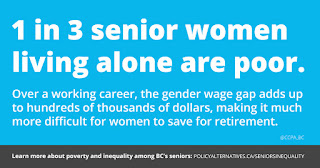 I'm sorting out my thoughts here for a few reasons.

We are putting together an advisory board and seeking (a) funding and (b) forming a charitable entity if successful and (c) then lobbying the governments, both federally and provincially to supplement the meager financial support afforded this marginalized segment of the population.

Our mission - and by "our" I mean another senior woman and myself - is to remove the stigma from senior women and to restore them to a dignity of living and self-respect. Far too many senior women live in poverty and we have many seniors in Newfoundland, a number which increases every year. In 2017 it numbered 108,182 in a population of 500,000. Well over 25%. Of these approximately 65% are women: 70,300. It is difficult to get an estimate of how many of these are living below the poverty level (Category 2) and how many are retired (Category 1) from government, teaching and nursing which affords them a reasonable pension.

Total number of food bank users number 28,063 and of these 23.4% are seniors-6566 and applying the same percentage of women that would be 4,268 elderly women resorting to food banks.

And an aside: To give you an idea of how normalized a foodbank is here in Newfoundland our premier, Dwight Ball, presented the keys to a new one to the head of the foodbank when the old one burned down, grinning like a fool when he should have been covered in shame. The disconnect of the privileged wealthy politicians from abysmal poverty is rampant everywhere. 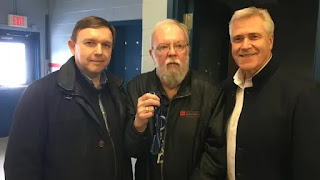 We live in a country of universal health care, thank heavens, but I'll tell you what's not covered for us Category 2 seniors (but usually covered by decent private supplemental healthcare policies for Category 1).

And of course it takes no rocket scientist to calculate that the lack of funds for such standard items contributes to injuries (poor sight, falls) feet infections (diabetic amputations) absence of teeth (nutritional deficiencies) costing the health care system far more with hospitalizations. And of course addiction to drugs and alcohol as a mechanism of coping with these stresses is fairly rampant as well if my own observations bear me out.

The elderly have been further stigmatized by society and treated as charity cases when they complain about their impoverished and deprived existence. Living on approximately $19,200 annually, rent in many cases is 30-40% (at 35% $6,720) of this and often higher leaving very little for power and heat, insurance, clothing and self-care, essential communication and entertainment services which are exorbitant here, food, eating out once a week, little gifts for family, etc. Having transportation of any kind (car payment, insurance, maintenance, gas)squeezes 50% out of the remaining $1000 per month which leaves $500 for EVERYTHING else including food. And if I hear one more time "give up the car!" in a province with no public transit system outside of the city I will scream loud and long. Every penny is counted and many of us are forced to work in our seventies, often in ill-health ourselves. Just to barely make ends meet. I know greeters at Walmart and baristas at Tim Horton's and home care workers well into their seventies, being cheerful and pretending it's not about poverty.

Measuring senior poverty by standard poverty levels is not using the proper criteria in that many are disabled and can no longer self-care and have no desire to be warehoused in nightmare institutions and need additional income to support the barest modicum of dignified living.

And of course, many of us are too exhausted and disillusioned and and dispirited to even think of engaging in any kind of activism to change the status quo.

And I am grateful, so grateful, I met a kindred spirit who joins me in this protest. And it's not about us two, but for all senior women penalized for raising children with no monetary value placed on this in their earning years, and if they did work, it was often at 66% of what men earned thus accruing far less in the pension funds, if there was such a benefit in those days - most of my positions had no pension. And every cent of my pay cheque was spoken for as a single mother with two kids. So please, don't talk about "savings."

I am very interested in your thoughts on this.

Posted by Wisewebwoman at 12:33 PM