This month's Words for Wednesday are brought to us by Elephant's Child who always has something unusual to offer. Please go visit her and read the entries and participate yourself (with a link to your blog post).


This week's prompts are familiar phrases:


Sun over the yardarm 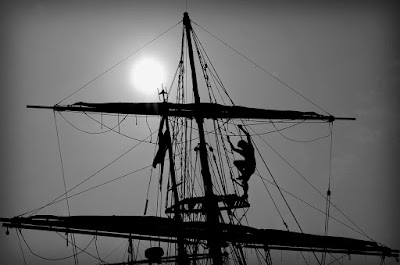 The old navy captain was a crashing bore, ninety if he was a day. He had joined Sunshine Resthaven Retirement home on the coast six weeks ago after his wife died and it had got to the point where the other forty nine residents would disappear quietly if they saw him in the halls or in the gardens but the mornings were different. They felt stuck like butterflies in a display case as their beds were being made and their rooms tidied up by the maids.

They'd all lie around the pool, somnolent, comfy in their morning naps, waiting for the lunch bell, and he'd bluster into this sacrosanct of areas, complete in his navy whites, his cap at a rakish angle.

"Wot, wot," he'd shout, in his faux British accent, "Sun over the yardarm yet me navvies?" and he'd salute them all smartly, clicking his heels,"Do I have to tell you what the yardarm is yet again?" And then he'd rub his hands and explain its origin. How the expression originated in the north Atlantic (of which he knew every wave, every squall) where the sun would rise above the upper mast spars - yards to those in the know - of the square sailed ships around 11 a.m. 'Aforenoon', he'd clarify, coinciding with the 'stand easy'command he'd issue to his officers who would then go below and enjoy their first rum tot of the day.

This would all be said in his loud clipped accent, much like a grade school teacher enforcing some difficult lesson on truculent ten year olds. And they were sick and tired of it all.

Bernice particularly. Today she decided to do something about this brazen daily intrusion on to their morning quiet time.

"So tell me, Captain," she looked up from her chaise, her hand sheltering her eyes from the sun,"I hear tell you all went commando on those ships of yours? Is that true?"

"Surely you know what commando is? I thought sailors practised it all the time? Tell us about it!"

"Of course, of course!" He coughed once more,"They did exactly what I told them! I was always in what you call commando! You have to be when you are running a tight ship like mine. The navvies have to be responsive, if I say jump, they jump, bend over, they......."

And at this, Bernice and the rest of them fell about laughing so hard, they began to weep leaving the Captain puzzled, then embarrassed and then in high dudgeon, marching off back into the main building to the continued accompaniment of uncontrollable hoots, hollers and thigh slapping.

Posted by Wisewebwoman at 11:50 AM