Enough With The Socks Already! And Postcards!

So here are the pair of socks I'm crazy about. The phone camera doesn't do them justice, they need to be taken out in bright sunshine and thrown on someone's feet and photographed properly. The yarn was a gift from my niece and I was delighted that there's enough left over to knit her a pair of these too. 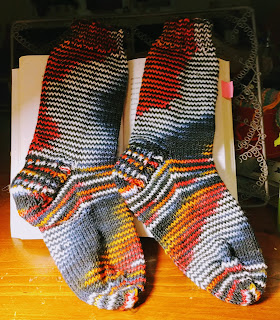 In other news - I love postcards. I get quite a few, though nothing like Daughter who sends and receives 100s every year from around the world. Part of a huge group worldwide that exchange PCs from their countries of origin following (usually) a theme.

So in the past three days I've received three and here they are: 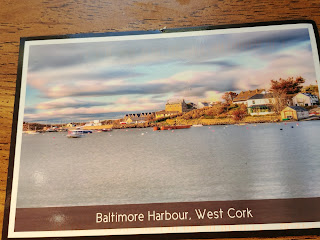 The second is from Grandgirl, who spent the weekend in Dallas Texas (I know!) at the grace and favour of her friend from kindergarten who had a business meeting there and treated her - these young 'uns all growed up and having business meetings when I pushed their swings in the playground. I am so impressed though that she took the time out to write and mail this PC to her grandma. 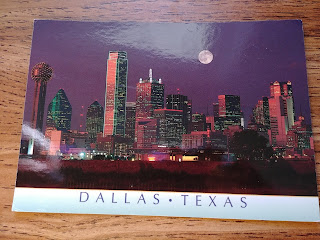 The third is from my school pal (friends since we were 11) who has beaten a deadly form of cancer and travels a lot and never, ever fails to send me a postcard. This is from Avignon and she planted an ear worm by reminding me of how we would deliberately sing Sur Le Pont Avignon in atrocious French accents at our French teacher in school and fake puzzlement at her enragement. So 3 days now and I have it stuck in my head. Revenge from Soeur LePaul. 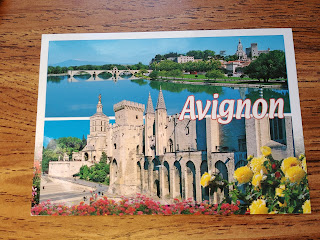 Posted by Wisewebwoman at 10:35 AM