I ran into an old friend after I gave a talk last night. He would call me a friend, I know that. And I used to call him a friend until I realized that it was all fairly one-sided. And I also realized that most women I know (myself included) fill in those awkward gaps with a few of our male friends. It's hard to explain this in writing but I'll try. I remember sharing with this guy a few years back about a terrible time I was having with far too many losses in my life and he never responded but immediately plunged into a new job or some-such that his son-in-law now had. And I thought whoa Nelly, off the share list with this guy as I felt immediately worse, as if he didn't give a flying.

So as I was saying I ran into him. And since I saw him last, about a year ago, I have changed. I now ride on a stick (George, my walking cane). I mean if the situation were reversed I would immediately ask him how things were, what's with the stick? But him? No, he just looked at me and gave me a hug and waited for me to ask him how he was, and I didn't and he didn't and then he walked away, as I didn't bail him out of the conversational well. It was most interesting. I'm going to do that again with others who only broadcast at me and never, ever ask how I am or show concern, etc., but launch into some kind of monologue after I ask how they are. Life's too short to put up with self-centredness like this or narcissism or whatever we call it.

A postcard of Adelaide from a blogmate with her own vignettes on the back. 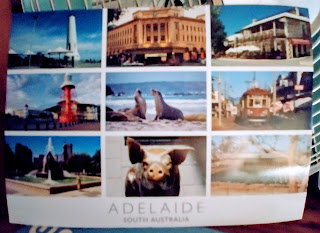 A postcard from my 18 year old friend, now on full scholarship in Halifax (she's brilliant) 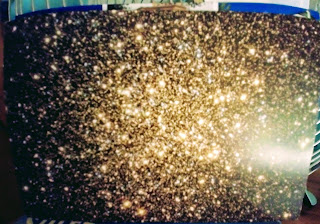 and here's a taste:
About 145 light-years in diameter, M13 is composed of several hundred thousand stars, the brightest of which is a red giant, the variable star V11, with an apparent visual magnitude of 11.95. M13 is 22,200-25,000 light-years away from Earth.
If you'd like more read all about it here.

And last but not least, I was hunting for a copy of this book for a long time and it finally arrived from Australia a few days ago. It was written by one of my high school teachers, the first nun in Ireland to gain a PhD. We're talking the fifties here folks. 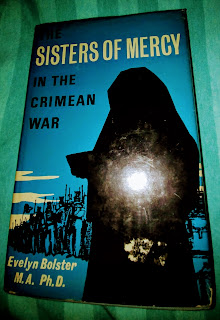 Posted by Wisewebwoman at 6:32 PM