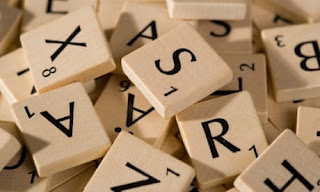 Essentially the aim is to encourage us to write.  Each week we are given a choice of prompts: which can be words, phrases, music or an image.   What we do with those prompts is up to us:  a short story, prose, a song, a poem, or treating them with ignore...  We can use some or all of the prompts, and mixing and matching is encouraged.Some of us put our creation in comments on the post, and others post on their own blog.  I would really like it if as many people as possible joined into this fun meme, which includes cheering on the other participants.  If you are posting on your own blog - let me know so that I, and other participants, can come along and applaud.
Here are the words for this week, In two batches with an image in the middle, use some or all of the prompts. Thank you so much for the opportunity to host W4W - I have enjoyed it immensely! I had fun with this week's prompts. The painting is "Back from Market" by Chardin. The prompts are from the poem that Eavan Boland wrote about it.
Good luck! 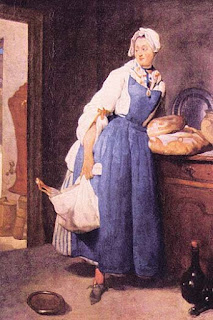 Claustrophobia was what she had to live with since she was twelve. It rendered her a recluse - for being in a confined space was impossible. Like now. Yeah, she had all the therapy, thank you very much. But even Dr. Herzel's large office was torture. Being told to stay with her feelings, let them wash over her, blah and blah cubed. Her impulse to run away and out onto the street always won.

Here in the small church where The Disciples congregated every Sunday at 9, was torture too, hemmed between her parents like a child. She was twenty one for God's sake. Home for the weekend from college.

The sounds of the Sunday Farmer's Market surged through the open church windows on the golden light from the morning sun. It was calling her name and this time she obeyed. The minister was pounding the pulpit in rhythm to her heart as she broke free, pulling her arm from her father's restraint, not caring about the hazard to his failing heart that he guilted her with every time she came home, "You'll be the death of me, child," clutching his chest over her latest innocent exploit, like drinking a glass of wine.

She flew outside the church door, mingling with the heady mix of peasants and the well-to-dos who stayed at a manageable distance from her, as they crowded the stalls of vegetables, fruits and meats.

She breathed in the intoxicating smell of freedom as she moved around.

It was high time indeed to deal with the undeserved punishment of her father locking her for five hours in the cellar's dark cold room for innocently kissing Albert in the school playground all those years ago.