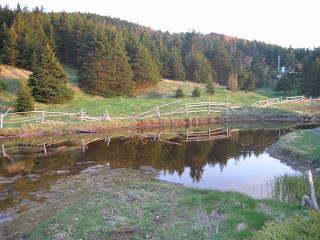 Travelling all the way to the core of our beings. How many of us get this chance? There are always so many distractions in my life. My work, my writing, my family, community, volunteer, theatre, friends, music. Whirl.

I needed this trip to be alone with myself. An old woman once said to me that to be truly successful in a relationship we first of all need to be totally comfortable with our own vibrations. Four days on the road presented the opportunity to me. Anonymous motel rooms, Carole King and her Tapestry album. J.J. Cale. Christy Moore. Beethoven's Fantasia, the precursor to his glorious Ninth. And on. Backdrop to my thoughts.

I've travelled a lot with others. Partners, family. Sometimes alone. But rarely this alone, no home to leave, the future so uncertain.

My father and I travelled around the Northern United States and Maritime Canada together, many times. I reflected on those times with him. We were thrown together a lot and this normally reticent, proud man would open up to me as much as he was able.

He was a long standing widower, a daily Mass attender, a Knight of Columbanus, a Vincent de Paul collector. He didn't believe in re-marriage although he assured me he had lots of opportunities. Parish priests in Ireland in that era presented him with many available women. I would like to think that it was the undying love for my mother that kept him devoted and celibate to her memory(and of that I have no doubt). But that would not be the truth at all. My father's firm belief was that remarriage created havoc with the original children and he wasn't going to have that kind of discomfort in his life. Plus he'd be taking a chance that it mightn't work out and the neighbours would have a field day with his troubles. So he confided. And I've no reason not to believe him for the time that it was in Ireland then.

I don't want to live his life and wind up as he did with his faith shattered by the freshly erupting scandals in the Catholic Church in Ireland then. Shaken to the core particularly by the Bishop Casey scandal (he worshipped Casey). My compassion for Dad was great. He was literally gutted by it all and I do believe his faith in God and the hereafter left him. And I think that in some ways he must have felt he missed all sorts of opportunities that were lost with the noose of his formerly strong faith around his neck. He was a broken man at the end.

I don't want to end up my days alone like him, cursing the darkness and my own belief system that has held me to this independent walkabout. I saw my own defects quite clearly on this trip. I saw him in me also. My rigidity, not suffering fools gladly when they have equal rights on this planet. My intellectual snobbery which intimidates, my "ICanTopThatitis" which is distancing and self-defeating. My thoughtlessness. My arrogance which can be downright funny when I think of it. I need to pay more attention to everyone and everything more often. I need to be more humble.

(picture taken a few days ago near my house in Newfoundland)
Posted by Wisewebwoman at 11:04 PM