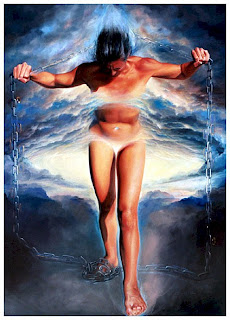 Until I finally surrendered to the fact I was a food addict, there was no way out. I had struggled far too long, hoping at the end of each diet that I would then be normal. I could then get control of this never ending hunger and be able to mete out my treats, become a salad lover and run 5 miles a day. A magical new person on the outside.

I forgot or chose not to think about the inner me. The one who needed to change. I had been far too busy in changing the outer me, .
Remind me. What was the definition of insanity again?

And I also knew I could not do it alone. Oh yes, everything was great for a while, charts on the wall marking the progress, calories eaten calories expended, measurements of right thigh, etc. Numbers. Meaningless numbers. That always brought me back, eventually, to the same person who needed to embark yet again, on the latest diet. What on earth would be a permanent way?

I had to let go of all the numbers. I was not a weight on a scale, or a dress size. I had a wardrobe of clothes that went from size 9 all the way to 24. Every morning I opened that closet and was reminded of what a failure I was. So everything that didn't fit me got thrown out and donated. Eight bags. I wept, but I threw. I was left with only clothes that fitted. And the most important thing of all. Underwear that fitted.

I've conducted self-esteem workshops on weekends with women and always ask the question, "Who's wearing lovely well-fitting underwear?". Inevitably, the answer is 3 or 4 out of 10. Only 35% of women honour themselves with nice underwear. Think about it!

I also had to recognise that the weight was only a symptom of underlying emotional issues. And believe it. And work on it.

I then had to define a method of eating which would work for me. What particular foods seemed to trigger me? I was surprised when I wrote the trigger foods down:
Any kind of soft drink whether diet or not, cookies, cake, icecream, pastries, candies, popcorn.

I recognised that, for me, I could never use food as a reward, I could never take even a bite or sip of any of the above substances as I never knew what kind of binge would be set off. I had to be clear about my food intake. Weighing and measuring was not for me. But I learned from what others did. They had 3 moderate meals a day, no seconds, no snacks, and the meal had to fit on one plate, no piling.

I wanted to be relaxed around food and to do this I had to have clear boundaries. Breaking those boundaries would set me off again. I had to make exercise part of every day. I had to go to bed on time and get up on time. I knew I was not a gym person, though Maude knows, I tried. Walking or jogging does it for me. Gentle. I turned the old Nike ad on its head and said my motto is "Doing it. Just".

I needed to monitor my emotions meticulously as building up any kind of anger or resentment resulted in trying to stuff those feelings down. I needed to talk to others who understood, who were travelling the same path as I was. And I found them.
And the compulsion was lifted. And the food is peaceful now, way in the background of my life. Beyond anything I had ever hoped for.

I wear the world like a loose garment. I don't weigh anything including myself. I don't measure my journey in tape measures or scales or calorie counters. And I am living my dreams. Really and truly.

And if you're interested in more specifics on what I have done to bring me to this space and having this magical freedom from the food that enslaved me:
You can email me directly at: wisewebwomanathotmaildotcom and I will gladly answer any questions.
Posted by Wisewebwoman at 10:04 PM