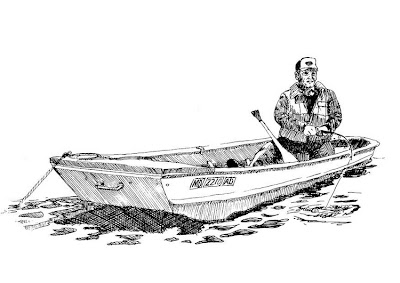 I became citified at a very early age. Six. Prior to that, I lived in a small provincial town in East Cork, Ireland, with frequent visits and sleepovers in 'the country' where my grandparents lived on their acre of tenant holding, existing on the flora, fauna and fish of the landscape around them.

One of my first crystal clear memories is of getting up before dawn and being taken by my grandfather to check the snares for rabbits, which would subsequently be cooked as our midday meal. I remember the tramp down the meadow, our little cottage down the way with the smoke puffing up from the chimney to thread its way through the early morning fog. The dog leaping and bounding, catching the scent of the rabbits tied with a cord and slung over Granda's shoulder. The smell of Granda's tobacco, clinging permanently to his heavy tweed jacket.

Then we moved to one of the first suburbs of Cork City. An alien frightening world to a small child like me. A world, it seemed, full of boy-children, scary and catapulting and hurling and forming gangs to throw rocks at each other. (Sub-suburban life, who knew?). I was never a dolly-playing child so to offset incredible boredom, I joined those frightening creatures and climbed trees and played hurling and became a spot-on stone thrower at the many gangs who attempted to dislodge us from our 'fort'. Heady days. The seeds of equality were set right there, at six.

What fun the boys and I had ! I became truly one of their heroes when a gorgeously huge toy pram I'd been given by the 'other' grandmother was immediately stripped of its hood and covers and converted into a two-person trolley for careening down hills and shipping fresh boulders for further fortification of our HQ.

And now I'm living on an island of men who've never seemed to have moved away from the boy-children they were. In the best possible way.. They have cabins in the bush. They have quads (ATVs to the uninitiated) and wooden boats, and rifles and won't walk down a road without a fishing rod. They talk motors and refittings and wells and where the best berries are and the size of the moose in their freezers. And they toss rocks around to make retaining walls. And they drive trucks carting unidentifiable large pieces of equipment from place to place. And they tow big boats. And they all have sheds (clubhouses) where they congregate and build more stuff.

“Irv had rediscovered, as surprisingly few men do, that the secret to perfect male happiness is a well-equipped clubhouse.”

And I've built a shed of my own. With electrical tools hanging on the walls. And a huge workbench. And I just might be buying a small old stick-shift truck to move some stuff around. And one of these days, the boys might just come and play with me.
Posted by Wisewebwoman at 1:40 PM