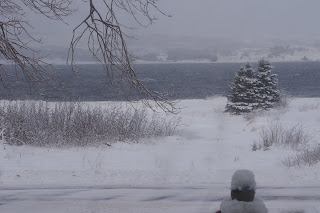 Yesterday was a monochromatic day in the outport between the snow and matching sky and water. Even the trees can't assert themselves with their white cloaks.

Everyone is hunkered down, in front of the fires or the big screens or their i-phones.

Ah, the i-phones, bleeding what's left of outport cellular internet connection to leave me with sporadic or worse - the message “searching for network”. All day.

I took the opportunity in the last few days of ploughing and pruning through all last year's cards and my shamefully overflowing in-box of 1,100 emails. Between the cards and the emails there is some pre-dump hesitation. Always. I feel so callous rubbishing some – the thank-yous for the sympathy, the notes I get from good people who take care of the elderly and homeless, love-notes from friends and family, photos that really don't mean much to me as they involve other unknowns, like a friend who was re-united with the child she gave up for adoption 65 years ago. Yes, you read that right. A most happy and wonderful re-union. Unlike most. I've had other friends who attempted the same and were firmly rebuffed. It must be like playing Russian roulette. It takes huge courage. And it does not end well in 80% of cases.

And on the same theme, I hear other stories of long ago, whispered in the night, of young girls giving birth in secrecy and their parents “taking care” of the child. A sad little pile of dirt behind the barn. All because of Christian censure by the clergy, neighbours and family. A secret murder being more honourable than the birth of a bastard and a daughter being “spoiled”.

And of young sons being whacked across the back of the head with a shovel before puberty and rendered simple. Simple enough to take orders without question for the running of the farm sans the desire to leave it for big city lights. And who was to notice or judge back then, when others were doing the exact same thing. Indentured slavery.