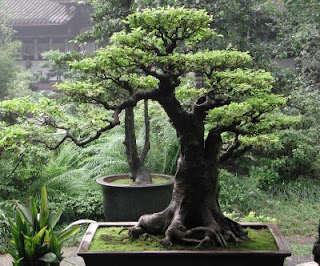 The ending had been abrupt. Their relationship had been worth more, surely, than that last cruel phone-call, followed by her hurriedly packing up the boxes of ex-lover debris, the bathroom detritus, the changes of clothes, the zircons (she would've kept diamonds, if there had been any) that outrageous red lingerie, the books, the letters, the cards, the framed pictures, the silver-plated (plate? pshaw!) hair gear, the tiny emerald earrings, the golden chains.


She had felt bad when it came to the bonsai garden, even though it had seemed rather too precious sitting on its own table in the curved corner of the living room. But still. It was perhaps the only element alive of what had once been an incredible passion. It came complete with water ponds and tiny lily-pads which had died when she had forgotten to fill the water tank at the back. But the miniature oak held firm and green. She wondered how it all would fare in the box on the post office truck to his house and couldn't stop the guffaw, yes, it was an uncontrollable guffaw, thinking of all that earth spilling over his black underwear. He wore only black jockeys. Clue number one to the fallacy of a man who declared himself adventurous and fancy free.


But there was a missing element to the break-up. And she couldn't nail it. Something didn't sit right. What the hell was it?


He had been very depressed. Had actually forbidden her to be happy as it was making his depression worse. He went on and on about his financial situation. He was way over extended in the financing of his real estate portfolio. Lines of credit, expensive mortgages, utility and tax bills. Along with an upcoming finalization of the asset split between himself and his ex-wife (his second). His son had severed a business relationship with him. He was at odds with his grandsons, couldn't tolerate their ill manners, the long hair hiding their downcast faces as they thumbed their electronic devices. Who were these creatures with no respect for the old?


She had suggested therapy. She had given him financial counselling (not a small thing, it was her living, after all). She had continually asked if there was anything she could do, anything to help. He would respond he would wind up on the streets begging for quarters from strangers He didn't deserve her. She thought he might snap out of it. He was beginning to sound like a peevish querulous old geezer, someone from another generation.


He was far from the man she had fallen in love with. His new criticisms of everyone and everything associated with her had given her this unvoiced anger which rippled across her life and tainted even the small victory of a morning run. He had begun to hate her leaving him when they were together even for such a mundane event as a dog-walk. His refusal to walk came by way of his mother who had lived to ninety-five with no exercise. For an intelligent man with many degrees he could be quite obtuse.


All in all, the break-up wasn't a bad thing. She knew that. Logically. But what did emotions have to do with logic?


And still the thoughts of the pre-depressed Jack kept intruding. The light-hearted Jack. The supportive Jack. The Jack who would sit in the bathroom as she showered at the end of a long working day and would say: “Tell me all about your day.” The Jack who would travel hundreds of miles for an art exhibit. The Jack who would book outrageously luxurious hotel rooms for no reason in Niagara Falls and Kingston and London. The Jack who would sing publicly walking along a Toronto street and tell anyone who would listen of his love for her. There had been two years of this lightness, this fun. And then.

Posted by Wisewebwoman at 10:21 PM