Further to my post on Wot? A Wacky World? yesterday, the U.K. Guardian answers the dilemma of some of us on the lack of North American media attention to the biggest crisis of the millenium, namely climate change, with an article titled:

"With serious reporting of global warming by US media virtually nonexistent, it's no wonder Americans are paralysed in denial."
It is accompanied by an affirming photo of a Burger King sign. 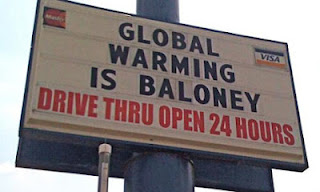 So, yes, as per your comments Europeans are well stocked with full media information and even corrective measures in countries such as Germany with its focus on solar energy.
But here in Harperland (Canada) with the pushing of the Alberta oil sands and, Maude forbid, the drilling of the arctic a coming reality, it's no wonder that so little is said of the ongoing catastrophic effects on Mother Earth of our profligate ways or the possibility of a corrective turn in our plundering and despoiling of her resources.
Posted by Wisewebwoman at 6:58 PM