Of Sheep and Oil 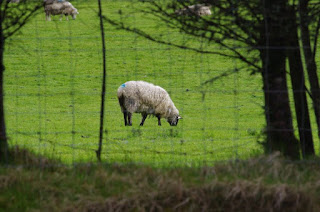 Out here on the edge of the Atlantic I have a meat man who delivers fresh local meat. Seriously.

A man who takes pride in his produce. Today he had fresh local lamb. Mein Gott! I find that frozen New Zealand lamb in the freezer section of the grocery store abhorrent. And this in a province that has sheep and lambs wandering all over our barrens.  Of course the fairly recent introduction of coyotes here (what do they do, build themselves little rafts in Labrador and sail off for better pickings on our island?) has proven a huge threat to the sheep farmers. But still.

Something should be made of local lamb. And the fleece. A friend is a sheep farmer. More like a hobby as he loses money feeding the coyotes with his produce and subsidizes his sheep with his fishery income. He's getting older. None of his children have followed in his path. The salt is in his blood, he tells me. He could never do anything else. And wonders why his children don't feel the same. They're all out at the oil in Alberta. Raising their children, his grandchildren, out of sight, smell and sound of the sea.

He decided to visit what held them all there last year. A first out of province trip for him.  They took him to the tar sands.  He couldn't find the words for it as he tried to tell me. Words don't exist, he finally said.

It had to be the money, the big money they all made to keep them there locked up tightly with their children at the local schools and big sad houses in new subdivisions where he and his wife had their own suite with a Jacuzzi they were afraid to use. A daughter was a petroleum lawyer (new one on me), a son was an engineer, another a pipe fitter. Pipe fitters make more money than anyone else. And no, he didn't know where all these pipes were going, must be a government secret.

He felt he couldn't breathe most of the time. He felt a huge unbreachable distance between himself and his children even as he pretended to admire all the trappings of wealth they had accumulated.

And wondered where he had failed them. 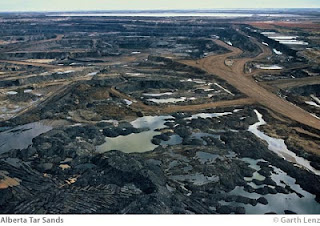 Posted by Wisewebwoman at 12:52 PM