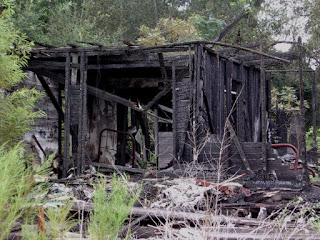 Parts of the story I remember. Not the most gruesome parts, but the ordinary stuff, the mundane. Ever find yourself looking at a photograph and just focusing on the everyday bits around the subject? The cups on the table, the glasses on the bureau behind them, even the blanket on the couch, the wallpaper on the walls? That's the way it was with me and this story.


He came back to the old place and patched and plastered, painted and puttered around it. It looked an awful mess from the outside but inside, if you got in and very few did, it was cozy. He'd even matched his dishes, white with a blue stripe. The old Enterprise stove was always glowing with the old black kettle on top.


You'd have to walk by the place when you went berry picking and he'd wave if he was outside. Friendly like. But he'd turn away right quick and you got the message he wasn't open for the chit chat.


You couldn't get the reasons for coming home out of him, though many tried. Why did he come back from all that money out in Alberta? And his boys left there, three he had, along with the wife, though Bernie had it she was Chinese.


What does it take to uproot yourself and come rushing home to the falling down old place that his father had died in twenty years before?


It was late Christmas Eve when they noticed the flames shooting up over the trees. And they all drove over and took the cover off the well and started passing buckets of water over the meadow and dumping them on the house. The firetruck came soon after and lashed the place with foam and flood but it was all too late.


The heat was intense and they had to wait for it all to cool down a bit and then they found him sitting on the remains of a chair next to the old Enterprise. Like he was warming himself.


When I was walking past there, and I was told the story, I noticed all the broken rum bottles in what used to be a flower garden. And then they told me he was deaf. From birth. Like his sister Jenny. Genetic or something. Second cousin stuff.


And I saw something white and blue in the grass and it was a dinner plate and I picked it up. Not a crack or a mark on it.


And I took it home.

Posted by Wisewebwoman at 8:00 AM