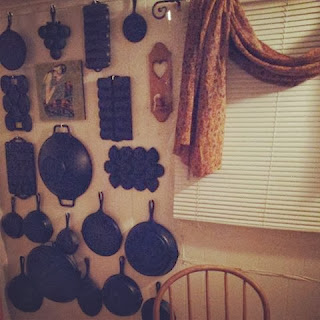 Daughter's kitchen and its wall of cast iron goodies. All of which she uses regularly.

Daughter brought her cream of broccoli soup, gluten-free, dairy-free, legume-free. I made my smoked salmon frittata. She also brought muffins.

We sat in front of the fire and ate this delicious repast. And got caught up. There has been limited visiting with each other because of the weather. So this time together was to be treasured. Later on we had a long walk, the old boreens were pretty packed with others carpe-ing while they could. We admired the sea views, the clear blue skies, how joyful Ansa was on the walk, the fellows out cutting wood on the edges of the road, the fellows with half a moose on the back of their trailers.

We spoke of of the Newfoundland Grand Blackout of 2014 which seizes every bit of writing and reportage around these parts and even to the national level. Our premier, Kathy Dunderdale, has been blistered repeatedly for her arrogance and down-talking to the peasants, basically telling us peons it wasn't a crisis even though people were dying and elders moved from senior homes to generator-run hotels in the dark blizzards of the night on stretchers borne down countless freezing concrete emergency stairs. Rumour has it that Kathy was banjed off on a beach in Florida and had to be dragged back kicking and screaming into darkened Newfoundland by her handlers to orate to her pitiful peons. As some pundit put it so well: "She speaks to the residents of the province like some vice-principal berating a class of poorly behaved 4th graders." She does.

But we survive. About which I've written previously. The kindness of strangers and neighbours and that Irish dark humour that keeps us all going. And emergency preparedness like torches and wood and batteries and candles. Note to self: buy some kerosene when it's back in stock again for those decorative oil lamps.
Posted by Wisewebwoman at 12:36 PM