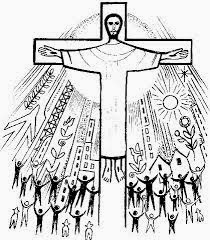 I wouldn't call him a friend, exactly. But he was more than an acquaintance or a ship passing in the night. I wonder why there isn't a word for those in between relationships.

He helped me a few times with research in the library. I was looking into the Blue Puttees - a Newfoundland regiment that fought in Beaumont Hamel in France in WW1 to an enormous loss of life and devastating effect on this island - a whole generation of young men wiped out and sacrificed for nothing. We'd meet frequently at cards and engage with each other relentlessly. A sort of semi-flirtatious repartee. Tall and quite handsome with a full head of silver hair, he was a life long bachelor with an obsequiousness for all things Catholic.

He reminded me greatly of the old Catholics I was surrounded by in Ireland. The sanctimonious ones who would lodge in one ear while renting out the other one.

The most peculiar thing he'd do would be staggering around on Good Friday up the road outside the church with a cross on his back, atoning for his sins.

He struck me as always being terrified. I'd heard he'd had a nervous breakdown way back in the day and was forced to retire early from teaching. He filled his long retirement years manning a volunteer library which he kept stocked and sorted and indexed. He opened it up two afternoons a week but you had to call first to make sure his opening the library was worth his while.

We bonded over books, though he was easily scandalized by any "unmoral" writings which forced me to tease him mercilessly. I did try desperately to be kind but the sight of him blushing and sweating would encourage me in the other direction. Though a small part of me still insists he enjoyed being scandalized.

He drove around to my side of the bay and brought me green peppers from his garden one year which I made into green pepper soup and froze. But he would never come into my house as he was terrified of dogs and didn't know why anyone would have one in the house where people ate and slept.

According to local lore, he was a savage gossip and just about ran the local church, the right hand man of the priest who was on the right hand of God himself. Inwardly, I referred to him as "priesty man".

I am saddened at his passing yesterday. Suddenly. He never travelled off the island and admitted to me the thought of leaving it made him "sick." He would laugh long and hard and inappropriately at something that confused him which could irritate those in his company.

I feel I could have done more for him. Been kinder and more welcoming when he'd stop his car when I was out road- training. He'd ask me if I was coming to the library soon or could I drop by for a cup of tea at his brown house across the bay.

I never did.
Posted by Wisewebwoman at 8:07 PM