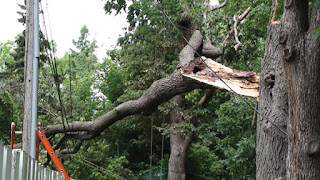 I've wanted to post about this topic for a while. Being weaned on movies (pictures) in my life, the black and white of character depiction by Hollywood was a belief I held for a long time. Bad guy/woman = no redeeming features. Good guy/woman = no dark side.

I remember seeing a play. The Steward of Christendom (in the Abbey in Dublin) that showed a bad guy ( a male nurse) mistreating an elderly patient in a psychiatric home. In the second act it showed the bad guy being superbly kind. No one, truly, is all bad or all good, in spite of Hollywood. That play has stuck with me over the years.

I took a workshop with an older woman in Toronto a few years ago. It was about exploring all of ourselves, loving the inner, exploring our own darkness. At one point she said: "There's a Paul Bernardo within all of us." It gave me a chill. Us participants looked around at each other and then slowly nodded. Of course there is. Most of us can squelch those murderous thoughts, but a very few act them out.

Which is all in the way of saying I had a problem with my unsold salt box box. There was a bad storm this past Sunday and a large branch broke off a tree and caught a wire which in turn was fastened to a corner of my house. The wire came down, taking with it a part of my roof.

I called the power company who were on it right away. They called me when they were on site to tell me it was a telephone wire that had downed. I called the telephone company who, fortunately, came the following day and disconnected the wire. I texted a good friend to request that he check out my property to ensure there were no further hazards. *Crickets*. That surprised me.

So nothing for it but to travel out to my old house to inspect things myself. There are other friends out there but for reasons I won't get into I didn't like to ask.

So I'm out back, loading my regular tires into the garage to await the spring, when who should appear on my meadow but Cathedral Man. all chatty and smiley.

My first reaction was to go sour and vinegary but then I thought, shyte, no. What a waste of anger and frustration. He asked me why the house wasn't selling and I mentioned the Cathedral. He looked genuinely surprised. Well. I then mentioned the wire and the corner of the roof. "We noticed that had come down," he said. Well. I responded I was upset about it.

"Let me go get a ladder and fix that all up for you, right as rain," he said. And he did.

And I thanked him. And thanked him again. And he said it was nothing.

See what I mean?
Posted by Wisewebwoman at 11:09 AM