This story is a prompt from Words for Wednesday. 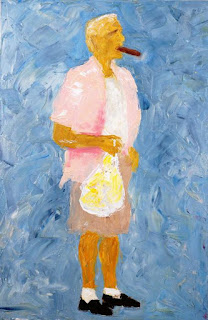 My father would have been 99 today. He should have been alive to see it. He took up cigar smoking rather late in life and enjoyed them far too much. He inhaled them. Yes, seriously. The lungs of an ox. He died 15 years ago from heart disease. I'd say caused by the smoking. But there's some that might dispute that. The man would walk a couple of miles a day and go for the long haul on the weekends. Healthy and hearty of appetite. A good grubber as we say in the parlance of my people.

He would find it hard to keep a straight face as two of his children (myself and my brother) would run marathons late in our lives. He thought it ridiculous. Me already a grandmother running my arse off around the city of Toronto. Why wouldn't we walk? How foolish was this?

He became belligerent about his latter day smoking. He would insist that fumes off the tailpipes of buses caused more lung cancer than his puffing away on his Maria Bendettis.

I wouldn’t let him smoke in my car when we travelled throughout the US and much to his chagrin I would descend to the role of persnickety parent with him:

“No one has smoked in my car, Da, so finish it before you get in.”

“What in God's name would one cigar do to a fumey old car? Are you mad?”

“No, but I will be very soon, get out of the car and finish that thing on the side of the road, or put it out.”

Saucy as a child, he would roll his eyes at me and there would be great heaving sighs and mutterings thrown my way as he angrily did what I asked, leaving behind him a heavy sullying of the interior air. No one likes being stranded on the side of the road in the middle of Pennsylvania. And he was against hitching as you'd never know what kind of axe murderer (or worse, he'd say, and I'd think, what's worse?) would pick you up and hack you into grains of sand. I would feel as if I'd caught one of my own teenagers smoking weed as I drummed my fingers on the steering wheel waiting for my oul fellah to do what I told him.

I find I'm getting to that age myself. Where my foolishnesses are ripe for daughterly admonitions (you're not driving all the way across the country BY YOURSELF? You're not eating SUGAR? Did you go out for your DAILY WALK?). I remember the dear old mother of a friend, post heart attack, ordering banquet burgers loaded with bacon and horrible greasy cheese and glaring at us in defiance as we sucked up our belaboured criticisms and let her at it.

It's a teetery old line we walk, much like funambulists, us seniors. Stranded halfway between rebellion and toeing the line.

This true story has been slightly modified from my original post in 2011
Posted by Wisewebwoman at 12:40 PM