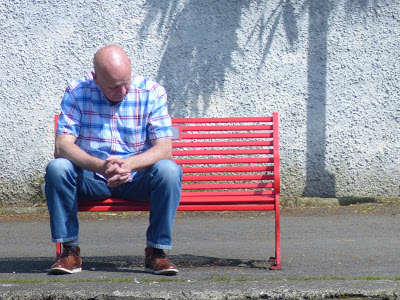 He'd wanted desperately to put his hands over his ears and yell and shout. To stop the torrent of words pouring out of her mouth, overflowing on to every tissue in his body. But he didn't. He was too conscious of how childish this would look, how demeaning and pathetic.

Instead, he left her standing in the kitchen in mid-flow. His wife of fifty one years now.

He tried to sort out the words she'd used, to put them in some kind of order and perspective.

She used the word narcissist, she called him a narcissist. He'd have to look that up, it sounded like he was a flower of some kind. No ponce he. No sirree.

Then she yelled "hopeless sociopath". Him. A retired detective. As if.

But the clincher was when she said it was time for them to go their separate ways. It was time for some happiness for herself after all those years of fearful living with a monster. Meaning him. Again, as if. He knew monsters, he'd put them behind bars.

She wanting to sell the house and share the proceeds. Give her freedom. Freedom from what?

When he was the best husband and father a woman could even dream of.

Now he'd go home, his home, and talk some sense into her.

Posted by Wisewebwoman at 12:15 PM